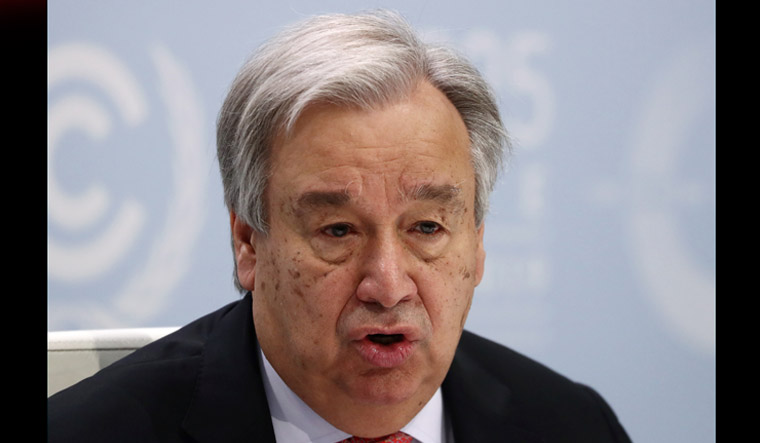 U.N. Secretary-General Antonio Guterres speaks during a news conference on the eve of the U.N. climate summit (COP25) in Madrid, Spain, December 1, 2019 | Reuters

United Nations Secretary General Antonio Guterres has asked governments to develop strategies to ensure that prevention and redress of violence against women is a key part of their national response plans for coronavirus.

Suggesting ways in which to prevent domestic violence during COVID-19 lockdowns, when women are trapped at home, and the authorities stretched with disease containment and management strategies, Guterres said that governments could make “increasing investment in online services and civil society organisations, making sure judicial systems continue to prosecute abusers, setting up emergency warning systems in pharmacies and groceries, declaring shelters as essential services and creating safe ways for women to seek support without alerting their abusers”.

Guterres was reacting to reports from across the world of the increasing number of cases of domestic abuse. “Over the past weeks as economic and social pressures and fear have grown, we have seen a horrifying global surge in domestic violence. In some countries, the number-calling support services has doubled,” he lamented even as he acknowledged that healthcare providers and police are overwhelmed and understaffed and that, in many places, domestic violence centres are either closed or full to capacity.

India, too, has reported an increase in complaints of domestic violence and even police apathy, as per the National Commission for Women, which compared the online complaints received during the first week of the lockdown with a pre-lockdown week.

Earlier, a number of influential women of G7 nations, including members of the 2018 and 2019 G7 Gender Equality Advisory Councils, had also flagged the issue, demanding that nations adopt special measures to protect those experiencing domestic violence and sought international coordination in dealing with such issues. The demand is signed by several prominent men and women from across the globe, including Nobel laureates, ambassadors, writers, activists and professionals. Some of the signatories are Emma Watson of the Harry Potter series fame, youth activist and Nobel laureate Malala Yousafzai, Gargee Ghosh of the Bill and Melinda Gates Foundation, executive director of UNAIDS Winnie Byanyima, Nobel Peace Laureate Leymah Gbowee and author-activist Michael Kaufman.

Their letter states that “Governments should ensure.... immediate removal of abusers from homes and provide support for helplines.” The letter points out that women and girls will face the brunt of the pandemic and lockdown at various levels. With schools shutting down, gender inequalities will exacerbate. It demands that women be given access to sexual and reproductive health services, including abortion, maternal health, pre- and post-natal care. “...we also call for free menstrual and modern contraception products for girls and women,” the letter states.

The signatories say that “as the crisis intensifies around the world, it is clear that if we truly want to save lives, and deliver health, wellbeing and dignity for all, girls and women must be front and centre of and included in the decision making of local, national and global emergency response...''