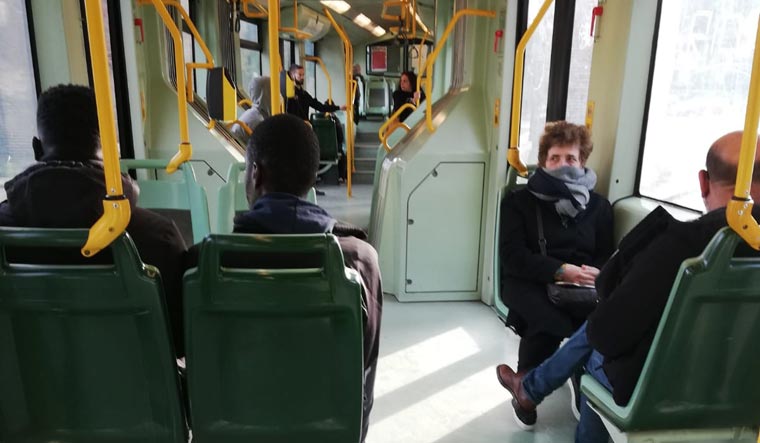 In Milan, the fashion capital of the world, a large group of Indians carrying luggage made a dash towards an India-bound flight at the airport.

But around the same time, another Indian, K. Santosh Reddy, raced towards his bicycle, wearing gloves, in a commercial area. A part-time delivery man, the 25-year-old was glad that he received an order that could help him earn 2 euros. A native of Hyderabad, Reddy is among the few Indians who chose to stay back in Milan despite the city, and Italy, coming under the cloud of the novel coronavirus. “My earnings have dropped drastically. I am not sure how I will pay my rent this month. I am hoping that my flat owner will be little kind this time,” said Reddy. Reddy delivers a variety of items that are ordered online.

A construction management professional, Santosh Reddy has taken up a temporary job till he finds a suitable employment opportunity. Contrary to what most of the Italians are doing by avoiding contact, Reddy has no choice but to remain outdoors whenever required and come in contact with strangers.

“Customers have been behaving strangely ever since the virus has become widespread. Most of the customers refuse to come out of their house and take the order. They tell me to leave the package outside the door and leave. Even when I say that I need confirmation from them, they refuse to listen to me. It’s a different story with pranksters and some youngsters. They take the order and start coughing in my face so as to scare me,” revealed Santosh Reddy.

As he explains his daily grind on a phone call, there is some disturbance in the background. According to him, it is a public interest announcement by local police. “They have come to my residential colony for the fourth time today. The cops are appealing to residents through speakers to not venture out. Life has changed here.”

Around 200km away is Bologna. It lies in north Italy where the death toll from coronavirus has been high. A local resident, A. Dileep Kumar, places his trust on traditional Indian home remedies. “The fear is always there that I can fall prey to this virus,” said Kumar. He has made it a habit to drink turmeric water and milk laced with pepper whenever he can.

His family back home in Hyderabad is constantly worried. “I am a railway engineer. Since I have a job in public transport, I am not exempt from coming to work. Everyday, I have to be inside a train and monitor technical aspects of the engine and submit a report by evening,” said Dileep Kumar. Kumar, like many others, is heavily dependent on sanitisers and tries his best to keep away from crowds and not touch external surfaces. Every evening, Kumar comes back home to an empty flat. “All my flatmates left to India. I cant do that because this is my dream job.”

The major concern among some Indians in Italy is about how they will be treated once they contract the coronavirus. Apart from language being a major barrier, there is a feeling that natives will be given top priority when it comes to treatment in hospitals, which are already overwhelmed with patients.

With most parts of Italy under lockdown, life has become extremely restricted for Naga Ayyappa, a mechanical engineer who lives in Rome.

“There is a new rule now. We have to carry a self-declaration form signed by us if we have to go out. We have to show it to the cops whenever asked for it. Also, we cannot move around in groups,” said Ayyappa. He shares that life has been challenging as most of the supermarkets and food stores have been shut along with all commercial establishments. “In most parts of Rome, very few stores are open. Grocery shopping is tough and time consuming. Maintaining a distance of 1metre, five-six customers are allowed at a time to get inside the stores. Only after they come out, it is the turn of next set of customers,” Ayyappa said.

Ayyappa, like his Indian counterparts, assured his family not worry about him. But it feels like there is a lurking fear of the virus all around.

“I wish Lifebuoy soap was available in Italy. Just seeing its caption that it kills 99.9 per cent germs would have brought some peace of mind to me,” said Kumar of Bologna city.