What made Italy the hub of coronavirus in Europe 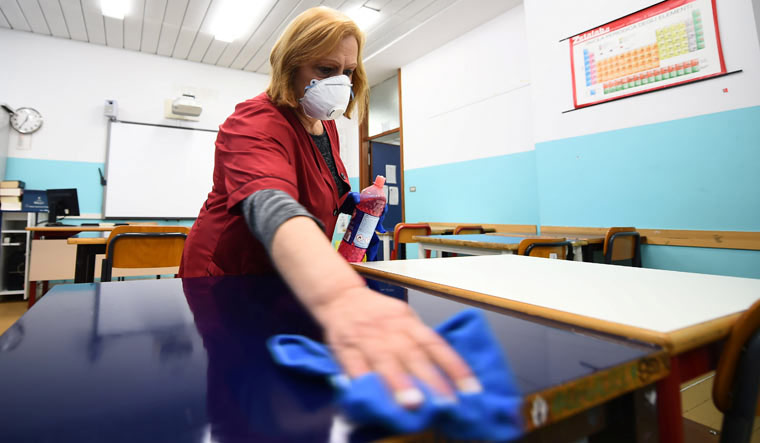 A cleaner sanitises a classroom at the Piero Gobetti high school in Turin, Italy, as part of measures to try and contain the coronavirus outbreak | Reuters

When the first two cases of the novel coronavirus (COVID-19) were reported in Italy, they were similar in nature to the first reported cases outside of China—a pair of Chinese tourists who had contracted the illness and tested positive.

The two were swiftly quarantined, and all flights from China were barred from the country. Italy responded rapidly to check the likeliest source of infection. The two tourists were not believed to have infected anybody else.

When cases started appearing in Codogno, in Italy’s northern Lombardy district just 60km southeast of Milan, there was no immediate link between them and the two Chinese tourists. Patient zero, it turns out, may be an unknown figure who infected several people across Italy long before cases started being reported.

What explains Italy’s rapid transition from having just a handful of cases—like most other European countries at the time—to becoming the epicentre of the coronavirus in Europe and the third-largest hub of the virus worldwide? In its latest update, Italy announced a 50 per cent increase in the number of cases on Sunday with 1,694 cases and 34 deaths.

The answer is still being investigated, even as Italy struggles to cope with a rapid outbreak. After a flurry of cases were reported in Lombardy, another outbreak occurred in Veneto. By March 2, cases in 30 countries had emerged with links to Italy.

Officials and experts alike have been reportedly battling it out over where the blame could lie. At first, Marino Faccini, the country’s head of Milan’s infectious diseases team investigating the outbreak, said that the couple from China were the likely sources. “Right now it’s the only certain piece of hard data we have,” he told The Times. However, by the end of February, Faccini told Reuters that patient zero was no longer being searched for. “We are [now] working to limit the virus and not so much looking for patient zero, whose [illness] dates back quite some time and is difficult to locate.”

One answer came via Prime Minister Giuseppe Conte, who blamed a hospital in Lombarde for failing to treat a 38-year-old patient—dubbed ‘patient one’— who infected 13 others but whose case was dismissed as one of pneumonia at first because he had no known exposure to China. The hospital was later criticised for not following emergency guidelines, leading to him being put into isolation after spending 36 hours at the hospital—during which time he infected several others.

A failure to detect and manage the initial spread of the virus is one possible explanation for Italy’s outbreak. But, another argument is that Italy tested too many people. The large-scale testing taking place in Italy is not being replicated in other European countries.

By counting asymptomatic cases, too, Italy may have created a perception of the virus being a larger problem than it really was. But this argument may not hold water when considering the uniquely infectious nature of the coronavirus—many people who may present as asymptomatic could still have the virus.

The case of the latest Indian to contract the coronavirus, a man who had arrived in Jaipur from Italy, highlights this—he tested negative for coronavirus at first, but then later tested positive.

Choosing to be overcautious may not be a bad thing for Italy. Recently, after the Lombardy commissioner for economic development Alessandro Mattinzoli tested positive for the coronavirus, it was announced that the entire regional government of Lombardy would undergo testing.

Italy has cancelled MotoGP events, its iconic Milan design fair as well as the Venice carnival. Schools and shops alike have been closed across the country. A lockdown currently affects 10 towns in the most-affected region of Lombardy.

Italy may not necessarily be the exception in Europe. On Sunday, WHO director-general Tedros Adhanom Ghebreyesus warned that other countries in Europe could report similar outbreaks. “There could be surprises in other European countries in the neighbourhood... but even for Italy, since they have strong institutions, I know they will manage it was quickly as possible,” he told CNBC.