US army might have brought the epidemic to Wuhan: Chinese official

"Be transparent! Make public your data! US owe us an explanation!" 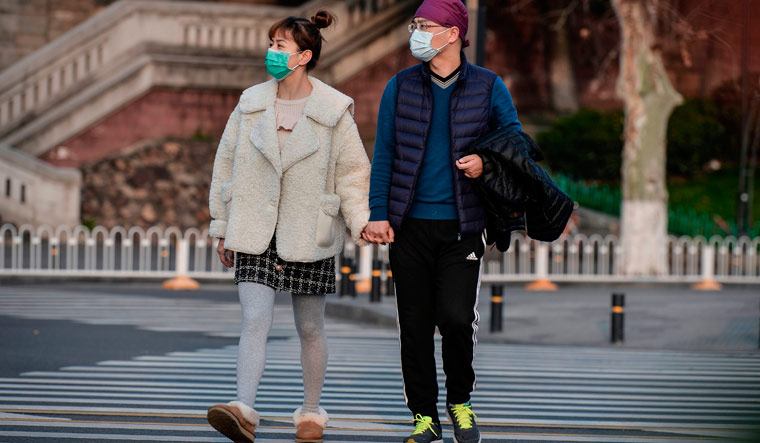 Residents wearing face masks as a preventive measure against the COVID-19 coronavirus walking along a street in Wuhan in China's central Hubei province. March 12, 2020 | AFP

A Chinese official on Thursday alleged that the US army might have brought coronavirus to Wuhan, China, suggesting that the deadly virus originated in the US.

Both governments seek to deflect blame for the outbreak, as the coronavirus disease (COVID) spreading from China to countries around the world and has been declared an pandemic by the World Health Organisation (WHO).

China's state-run Global Times on Thursday reported that US Centre for Disease Control and Prevention (CDC) Director Robert Redfield reportedly acknowledged some flu patients may have been misdiagnosed and actually had coronavirus.

"Even as the deadly virus continues to spread across the US, there are increasing signs of flaws and loopholes in the US government's response, including efforts to conceal information about the epidemic, possible failure to differentiate the coronavirus from the common flu, and attempts to shift blame on others with racist rhetoric," the report said.

Referring to Redfiled's remarks, one of the foreign ministry spokesmen, Zhao Lijian, alleged that US army might have brought the COVID-19 to Wuhan, the epicentre of the virus outbreak in China.

“It might be US army who brought the epidemic to Wuhan,” Zhao Lijian tweeted on Thursday.

"CDC was caught on the spot. When did patient zero begin in US? How many people are infected? What are the names of the hospitals? It might be US army who brought the epidemic to Wuhan. Be transparent! Make public your data! US owe us an explanation!" Zhao said in the tweet with a video clip of the CDC director's comments.

He, however, did not elaborate his allegation against the US army.

In October last year, Wuhan hosted 2019 Military World Games, in which the US armed forces had participated. The outbreak of coronavirus disease was first reported from Wuhan, on 31 December 2019.

On March 5, Zhao told a media briefing that the origin of the virus is yet to be determined, raising question over reports that the virus had originated from a live animals market in Wuhan in December.

"It is yet undetermined where the virus originated. Wherever its origin may be, China and all the other affected countries are victims faced with the challenge in containing its spread," Zhao said.

Asked on Thursday at a media briefing here whether China has proof that the coronavirus didn't originate in China and if so, where did it originate, Foreign Ministry spokesperson Geng Shuang said the "origin of the virus can only be determined by science. We need to rely on scientific and professional views. We don't hope to see anyone making an issue out of this to stigmatise other countries."

"With COVID-19 developing into a pandemic, the world should come together to fight it instead of levelling accusations and attacks against each other, which is not constructive at all," Geng said.

When asked about US President Donald Trump's televised speech on Thursday in which he said that coronavirus started in China and spread to other places, Geng said China has been "acting in an open, transparent and highly responsible way since the outbreak of the epidemic".

"We have taken the most comprehensive, rigorous and thorough measures in this all-out, people's war against the epidemic. Such extraordinary efforts have resulted in a growing positive momentum in epidemic control across the country," he said.

On Monday, Geng condemned US Secretary of State Mike Pompeo for branding the coronavirus as "Wuhan virus" terming his remarks as "despicable behaviour" and an attempt to stigmatise the Communist country.

The deadly virus that first originated in Wuhan has claimed over 4,600 lives and infected more than 124,330 people across 118 countries and territories.

China remains the hardest-hit with more than 80,000 infections and 3,100 deaths.