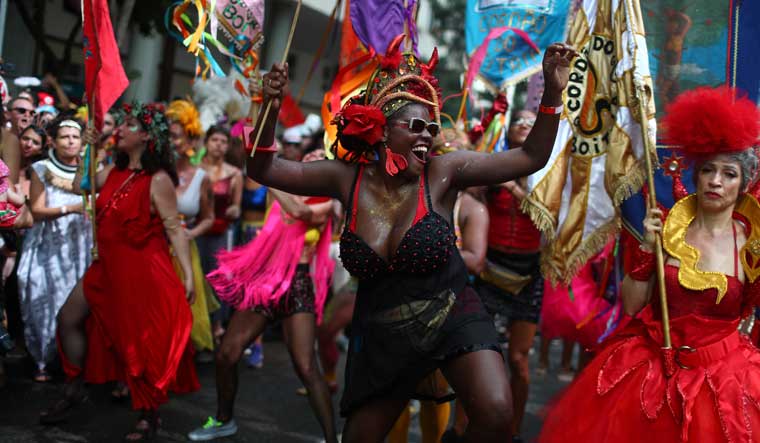 The annual Carnival in Rio de Janeiro starts on 21 February and thousands of Samba dancers are already practising their dance steps feverishly to the specially composed theme songs for this year. Besides the official parade at the purpose-built Sambadrome, there are the usual street parties that have already got the Cariocas (residents of Rio city) getting into the mode of celebration with beer and Caipirinha (a popular local alcoholic beverage).

But there is one important dignitary of the city who not only refuses to join the party but is also opposed to the joyful activities. It is the Mayor of Rio City Marcelo Crivella. Yes... The mayor of the city that gets over a billion dollars of income from Carnival tourism season every year!

During his term as mayor in the last four years, Crivella never attended the Sambadrome’s parade. He has refused to participate in the traditional ceremony in which the mayor hands over the key of the city to King Momo (the traditional 'king' of the Carnival). He has cut the traditional city budget for Samba schools. Crivella is putting out all kinds of bureaucratic obstacles to make the life of Samba schools and associations that hold Carnival parades more difficult.

The reason for Crivella’s antipathy to Carnival is the fact that he is a 'holy' priest of the evangelical Universal Church of the Kingdom of God, which considers Carnival as 'unholy'. Crivella prefers his own evangelical song, I am crazy for Jesus.

Crivella organised on 15 February a mega evangelical event in Rio to show the strength of his supporters vis-à-vis the Samba revellers. Crivella even got Brazil's President, Jair Bolsonaro, a supporter of evangelicals, to address the event. In May 2016, Bolsonaro was baptised in the Jordan River in Israel by Pastor Everaldo, a prominent leader of the Assembly of God church. Bolsonaro has promised to take Brazil to a “Jewish-Christian tradition” and place “God above all”.

Crivella’s position is not an isolated case. It is a reflection of the change being done to Brazilian culture by the Evangelical Christians who have converted almost one-fourth of the population of Brazil, the largest Roman Catholic country in the world. The entrepreneurial Evangelical bishops have succeeded in marketing their prosperity theology. In return for divine help, the followers of these Evangelical groups are made to contribute (tithe) a part of their income to the industry of faith of the pastors, some of whom have become multimillionaires and charismatic pop stars.

Edir Macedo, the uncle of Crivella, is the richest pastor in Brazil with a wealth of more than a billion dollars and private jet costing $45 million. His Universal Church of the Kingdom of God has over 5 million members and 13,000 temples across Brazil, as well as presence in several other countries, including the US. This church owns the second-largest TV station in Brazil, Rede Record, as well as newspapers and radio stations across 27 states.

Macedo has been accused of money laundering and other illegal activities for which he spent a few days in jail. The Evangelical churches use the entertainment industry to spread their message across Brazil. There are 128 Evangelical record labels and more than 600 radio stations dedicated exclusively to gospel programming.

These Evangelical churches are politically active and advise their members to vote for Evangelical candidates and sympathisers with the slogan “Brother votes for Brother”. The Biblical caucus in the Brazilian Congress is said to have nearly 200 members (out of the total of 513) proactive on issues such as abortion and same-sex marriage.

It is important to note that Catholic priests in poverty-stricken areas had worked for the poor and against the oppression of the military dictatorship during the days of 'liberation theology' in the past. In contrast, Bolsonaro, the patron of evangelicals and their 'prosperity theology', praises the military dictatorship and is cutting the budget for the welfare of the poor.

So, the Samba schools are counter-attacking the Evangelical mayor and the Pro-Evangelical president with their critical theme songs and floats.

The Mangueira Samba school is going to have a float of Favela (slum) Jesus with a black face, Indian blood and the body of a woman and the son of an unemployed carpenter and Mary of Sorrows Brazil.

The song says Favela, get the vision/There’s no future without sharing/And no Messiah with a gun in his hand, an allusion to Bolsonaro’s promises of loosening gun control legislation and of reducing punishment for police who kill suspected criminals. Bolsonaro’s middle name is Messias.

The poor people of favelas and poor Jesus are thus caught in the cultural clash between Carnival-loving Cariocas and the Carnival-hating Evangelical priests. While Carnival helps the poor forget their miseries temporarily and celebrate life for a few weeks during the parades, the Evangelical churches promise entry to paradise for their followers.

During my recent visit to Brazil, I saw for myself the cultural changes. Some taxi drivers have stopped listening to Samba music and instead play evangelical music. Many of them voted for Bolsonaro and told me that they would vote again for him. They did not see any future for Luiz Inácio Lula da Silva, the former president, nor did they share my admiration for Lula. A young Brazilian girl, sitting next to me in the flight from Sao Paulo to Curitiba, shocked me when she told me that she has chosen to be a religious worker and was not interested in any career in IT or business.

So watch out Galera… The Triple C spirit (Copacabana, Caipirinha and Carnival), which defined the cheerful and colourful Cariocas, is in for changes.

The Cariocas are caught between the Carnival lovers who say it is sin not to have fun and the evangelicals who consider fun as sin.