Activists urge Bangladesh govt to save rivers from slow death

Government is not doing enough despite court orders, they allege 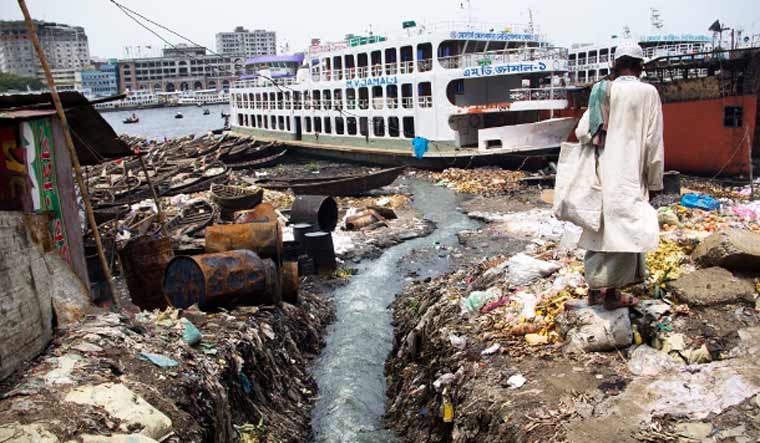 A man walks on the banks of the Buriganga River in Dhaka, a river that gave life to the city but now gasps for life due to massive pollution and illegal grabbing | Stephan Uttom/UCA News

A group of activists in Bangladesh has urged the government to take immediate steps to save rivers in the country from a “slow-burning death”. They lamented that despite several court verdicts, the government is not doing enough to save the rivers from devastating pollution and illegal encroachment.

Reacting to an official list of 49,558 grabbers of river and riverbanks, Sharif Jamil, joint secretary of Bangladesh Poribesh Andolon (BAPA), a leading environmental group, said the list was incomplete and the actual number of grabbers must be much higher. He also termed the government's promise to carry on crushing illegal structures and start a massive dredging project for some 178 rivers across the country from next month as a political ploy.

“Without proper demarcation, we cannot ascertain actual grabbers. These efforts seem more like a political ploy to gain popular support and to legalize many more financially and politically influential grabbers and polluters of rivers,” Jamil told UCA News.

Citing the National River Conservation Commission (NRCC), the news agency reported that  Bangladesh used to have more than 700 rivers but barely 405 exist today, including 50 shared with upstream India.

The NRCC was formed in 2014 following a high court order to  coordinate government efforts to save rivers from pollution and grabbing.

According to UCA News, Caritas, the Catholic charity, has been collaborating with environmental groups to campaign for conservation of rivers and water bodies in Bangladesh. The 2017-20 project, funded by Caritas Switzerland and the US State Department, aims to tackle the use of chemical pesticides on agricultural land in Bangladesh, India and Sri Lanka, it said.