All you need to know about Jerusalem, West Bank, Jordan Valley and the refugee crisis 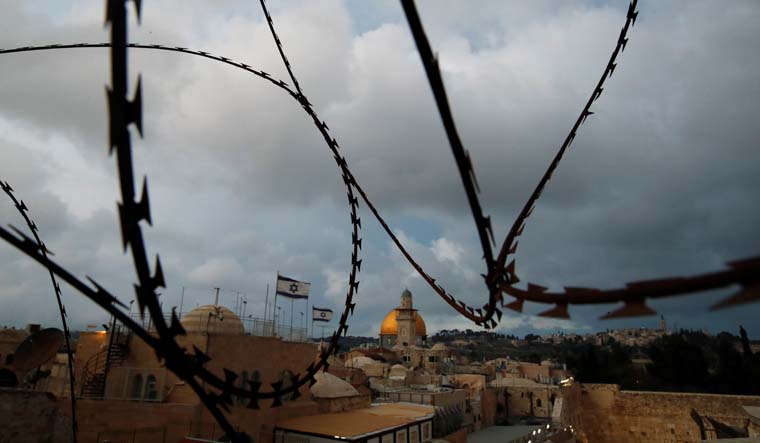 US President Donald Trump on Tuesday unveiled his Middle East Plan aimed at solving the Israeli-Palestinian conflict, an issue that has vexed his predecessors to no limits. In the plan, the highly contentious Jerusalem "will remain Israel's undivided capital" in a two-state solution. Standing along with the Israeli Prime Minister Benjamin Netanyahu in the White House, Trump said no Israelis or Palestinians would be uprooted from their homes. He said that under his vision, Jerusalem "will remain Israel's undivided, very important capital." He proposed Palestinian capital in East Jerusalem and that the US will set up its embassy there. "My vision presents a realistic two-state solution," he said. Together, we can bring a new dawn in the Middle East, Trump said, as he urged the Palestinians to accept his deal and bring peace in the region.

No Palestinian official was present at the launch. The ambassadors from three Arab nations—Oman, the United Arab Emirates and Bahrain—were at the White House. The Palestinian leadership roundly rejected the plan.

In his remarks, Trump said that his vision incorporates a massive $50 billion Peace to Prosperity economic plan, which will "spur the Palestinian economy". Under this vision, Palestinian refugees will be given a choice to live within the future state of Palestine, integrate into the countries where they currently live, or resettle in a third country. He said,  beyond territory, the plan provides for Palestinian use and management of facilities at the Haifa and Ashdod ports, Palestinian development of a resort area on the north shore of the Dead Sea, and continued Palestinian agricultural activity in the Jordan Valley.

Here are some features of the plan:

No right of return for the Palestinians

In the 1948 Palestine war—when British withdrew from the region—fought between the Arab states and Israel, it is estimated that at least seven lakh Palestinians were rendered homeless and refugees. The event is called Nakba (catastrophe), with a large population still living in refugee camps; the state of Israel was formed after the war. Trump's plan claims "there shall be no right of return by, or absorption of, any Palestinian refugee into the State of Israel."

Israelis fear that the absorption of the seven lakh Arab refugees would render the Jewish people a minority in the state, which already maintains a significant Arab population.

1. Absorption into the State of Palestine (subject to the limitations provided below)

3. The acceptance of 5,000 refugees each year, for up to ten years (50,000 total refugees), in individual Organization of Islamic Cooperation member countries who agree to participate in Palestinian refugee resettlement (subject to those individual countries’ agreement).

The status of the Holy City, which includes historical sites sacred to Judaism, Islam and Christianity, is one of the thorniest issues of the Israeli-Palestinian conflict, with both sides claiming it as their capital. According to the peace plan, Jerusalem—which has always been a divided territory—becomes Israel's undivided capital with status quo to be preserved at Jerusalem's Temple Mount/al-Haram al-Sharif complex, which lies in the eastern part of the city captured by Israel in a 1967 war. Israel will "continue to safeguard" Jerusalem's holy sites and guarantee freedom of worship to Jews, Christians, Muslims and other faiths. According to Trump's plan: Jerusalem will remain the sovereign capital of the State of Israel, and it should remain an undivided city. The sovereign capital of the State of Palestine should be in the section of East Jerusalem located in all areas east and north of the existing security barrier, including Kafr Aqab, the eastern part of Shuafat and Abu Dis, and could be named Al Quds or another name as determined by the State of Palestine.

Israel seized the largely-Arab eastern sector of Jerusalem during the 1967 Six-Day War, and later annexed it, claiming both sides of the city as its "eternal and undivided capital". Earlier, in the hands of Jordan, the Jewish right to worship was not recognised at the sacred Temple Mount. But, the Palestinians want the eastern sector as capital of their future state and fiercely oppose any Israeli attempt to extend sovereignty there. Several UN resolutions call on Israel to withdraw from territory seized in 1967 and the draft resolution contains the same language. However, Trump had decided on December 2018 to recognise Jerusalem as Israel's capital, breaking with international consensus, unleashing protests across the Muslim world, prompting a flurry of appeals to the United Nations.

Unlike many previous powers that had ruled Jerusalem, and had destroyed the holy sites of other faiths, the State of Israel is to be commended for safeguarding the religious sites of all and maintaining a religious status quo. Given this commendable record for more than half a century, as well as the extreme sensitivity regarding some of Jerusalem’s holy sites, we believe that this practice should remain, and that all of Jerusalem’s holy sites should be subject to the same governance regimes that exist today.

According to the plan: Significant improvements for the people in Gaza will not occur until there is a ceasefire with Israel, the full demilitarisation of Gaza, and a governance structure that allows the international community to safely and comfortably put new money into investments that will not be destroyed by predictable future conflicts.

The plan allows the Jewish state to keep a hold of  its "illegal settlements" in West Bank, which are largely considered unlawful under international law. Multiple reports have claimed nearly 600,000 Jews live in about 140 settlements built since Israel's occupation of the West Bank and East Jerusalem in 1967. The Palestinians have long called for the removal of all settlements.

The State of Israel will benefit from having secure and recognized borders. It will not have to uproot any settlements, and will incorporate the vast majority of Israeli settlements into contiguous Israeli territory. Israeli enclaves located inside contiguous Palestinian territory will become part of the State of Israel and be connected to it through an effective transportation system.

The plan, Trump said, calls for a four-year freeze in Israeli settlement activity. Asserting that his peace plan will more than double the size of Palestinian territory, Trump said that Palestinian people deserve a far better life" than being trapped in a cycle of terrorism and violence." Lamenting "the amount of needless bloodshed and squandered opportunity" in the Middle East, Trump said it's time for this sad chapter in history to end quickly and end now.

The Jordan Valley accounts for around one-third of the West Bank, which Israel occupied in the 1967 Six-Day War, and is crucial vis-a-vis Israel's security concerns. The largely-Palestinian populated region borders Jordan, and Israel needs troops there in case it faces another invasion, as it has in the past. In September 2019, Israeli Prime Minister Benjamin Netanyahu had issued a deeply controversial pledge on Tuesday to annex the Jordan Valley West Bank if re-elected. "There is one place where we can apply Israeli sovereignty immediately after the elections," Netanyahu said in a televised speech.

According to Trump's plans: The Jordan Valley, which is critical for Israel’s national security, will be under Israeli sovereignty. Notwithstanding such sovereignty, Israel should work with the Palestinian government to negotiate an agreement in which existing agricultural enterprises owned or controlled by Palestinians shall continue without interruption or discrimination, pursuant to appropriate licenses or leases granted by the State of Israel.

Trump's Middle East plan has prompted a lukewarm response from Europe and the UN, and a furious rebuke from key Muslim countries who denounced it as betrayal of the Palestinians.

Palestinian president Mahmud Abbas, who has taken part in previous US-led peace talks with Israel but stayed away Trump's proposal, vowed that "this conspiracy deal will not pass". He pledged to "resist the deal in all its forms" after meeting with various Palestinian factions in the West Bank city of Ramallah. "Our people will take it to the dustbin of history."

Top EU diplomat Josep Borrell said the bloc will "study and assess" Trump's proposals on the basis of its commitment to a "negotiated and viable two-state solution that takes into account the legitimate aspirations of both the Palestinians and the Israelis." Germany, the EU's most powerful player, echoed Borrell's point by calling for a balanced approach. "Only a negotiated two-state solution, acceptable to both sides, can lead to a lasting peace between Israelis and Palestinians," German Foreign Minister Heiko Maas said.

Britain, which is leaving the EU on Friday and has long had a special relationship with Washington, gave the warmest reaction. "This is clearly a serious proposal, reflecting extensive time and effort," British Foreign Secretary Dominic Raab said in a statement. Earlier, Prime Minister Boris Johnson spoke to Trump to discuss the plans. Downing Street said the proposal "could prove a positive step forwards".

The United Nations said it remains committed to a two-state solution based on the borders in place before the 1967 war, when Israel seized the West Bank and Gaza. "The position of the United Nations on the two-state solution has been defined, throughout the years, by relevant Security Council and General Assembly resolutions by which the Secretariat is bound," said Stephane Dujarric, a spokesman for Secretary-General Antonio Guterres.

Russia said it would study the plan and called on Israelis and Palestinians to negotiate directly to find a "mutually acceptable compromise." Introducing a note of doubt, Deputy Foreign Minister Mikhail Bogdanov said: "We do not know if the American proposal is mutually acceptable or not. We must wait for the reaction of the parties."

Turkey, a strong advocate of the Palestinian cause, condemned the plan. "The United States' so-called peace plan is stillborn," Turkey's foreign ministry said in a statement. "This is an annexation plan aimed at killing a two-state solution and extorting the Palestinian territory."

Iran, which does not recognise Israel and has been in a confrontation with the Trump administration, denounced the plan as a threat to regional stability. "The shameful peace plan imposed by America on the Palestinians is the treason of the century and doomed to fail", the Iranian foreign ministry said.

Lebanon's Iranian-backed movement Hezbollah, which Washington calls a terrorist group, said the plan represented an attempt to "wipe out the Palestinian people's rights", adding that the "shameful move... could not have been made without the complicity and betrayal of a certain number of Arab regimes."

The United Arab Emirates, which sent its ambassador to Trump's announcement alongside Netanyahu despite not recognising the Jewish state, praised the plan. "The plan announced today offers an important starting point for a return to negotiations within a US-led international framework," the UAE embassy in Washington said on Twitter.

Egypt called on "the two concerned parties to undertake a careful and thorough examination of the US vision to achieve peace and open channels of dialogue". The foreign ministry added that negotiations should aim for "a comprehensive and just peace and the establishment of an independent Palestinian state".

Jordan's foreign ministry said that an independent Palestinian state based on pre-1967 borders was "the only path to a comprehensive and lasting peace".