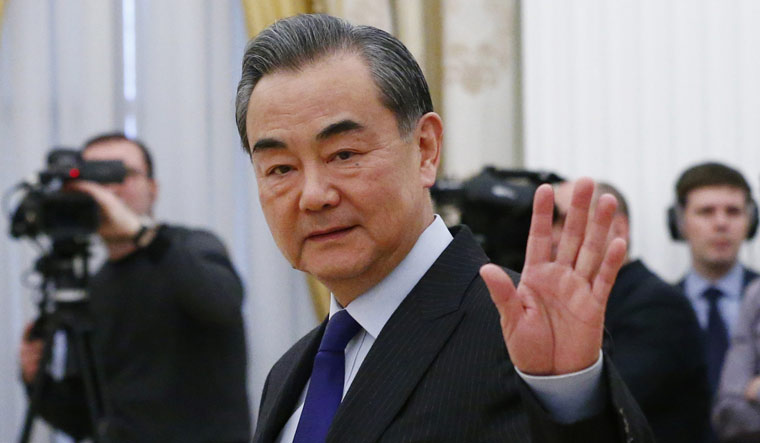 After the attack carried out by Pakistan-based Jaish-e-Muhammad in February that killed 40 CRPF personnel, India carried out airstrikes against the biggest training camp of the terror group in Balakot in Pakistan.

The airstrike was followed by aerial combat between air forces of the two countries on February 27 when Pakistan jets entered India. While chasing Pakistani jet an Indian Air Force jet crashed in Pakistan occupied Kashmir following which its injured pilot was captured. Pakistan quickly announced to release the Indian pilot, who was subsequently handed over to India.

At the height of the Indo-Pak tensions, China sent its Vice Foreign Minister Kong Xuanyou to Pakistan to counsel restraint from Islamabad.

In an interview to the ruling Chinese Communist Party's official newspaper, the People's Daily, about China's diplomatic achievements in 2019, Wang mentioned post-Pulwama tensions and Beijing's attempts to bring peace between India and Pakistan.

"During the India-Pakistan conflict, China supported the efforts of the two sides to defuse tensions and manage differences through dialogue," Wang said, without directly referring to the Pulwama attack and the aftermath.

The transcript of his interview was circulated to media on Tuesday by the Chinese Foreign Ministry here.

Also, Wang mentioned the 2nd informal summit between Prime Minister Narendra Modi and Chinese President Xi Jinping in October at the top of highlights of the Chinese diplomacy in the neighbourhood, saying the meeting helped the two sides to charter the course for the steady growth of their ties.

"There are many highlights in China's neighbourhood diplomacy this year," he said.

"First, we have improved and developed relations with our neighbours in an all-round way. President Xi Jinping and Prime Minister Narendra Modi had a successful second summit in Chennai and charted the course for the steady growth of China-India relations," he said.

Earlier at a symposium on China's diplomacy in 2019 held here on December 13, Wang said the Chennai summit had set the tone for a steady and sound development of ties between India and China.

Over the past year, China has comprehensively strengthened relations with neighbouring countries and made positive contributions, promoting regional stability and development, Wang said, while highlighting China's diplomatic outreach in the neighbourhood.

President Xi and Prime Minister Modi held around five-and-half hours of one-on-one talks spread over two days as part of the second informal summit in Chennai.

"The two leaders had a long-term and in-depth strategic communication. They decided to deepen pragmatic cooperation in various fields, promote exchanges and mutual learning between civilisations, and maintain a stable Sino-Indian relationship," he said.

The two leaders held the first informal summit at Wuhan last year followed up with the one at Chennai this year. They have agreed to hold their third meeting in China next year.

At the Chennai summit, the two leaders agreed to establish a High-Level Economic and Trade Dialogue mechanism with the objective of achieving enhanced trade and commercial relations, especially to address India's trade deficit with China which last year amounted to over $57 billion in $95.5 billion total trade between the two countries.

The Chennai summit "set the tone for the steady and sound development of China-India relations and opened up new prospects for the mutually beneficial cooperation between the two countries," Wang said in his address.

In his interview to the People's Daily, Wang said China has improved its diplomatic outreach in the neighbourhood.

"China has served as a mediator between Myanmar and Bangladesh to encourage a negotiated solution to their outstanding issues," he said, referring to the differences between the two countries over the Rohingya refugees.

Wang also spoke about improvement of relations between China and Japan, which in the recent past were affected by tensions over the disputed islands in the East China Sea.

"China and Japan reached a 10-point consensus on improving and growing bilateral ties, giving the relationship a strong momentum to return to the right track," he said.

"China-ASEAN relations have entered a new stage of all-round development, as evidenced by the important progress made in the consultation on a Code of Conduct in the South China Sea and greater stability in the region," Wang said.