MiG gunning down an F-16 has the Russians smiling 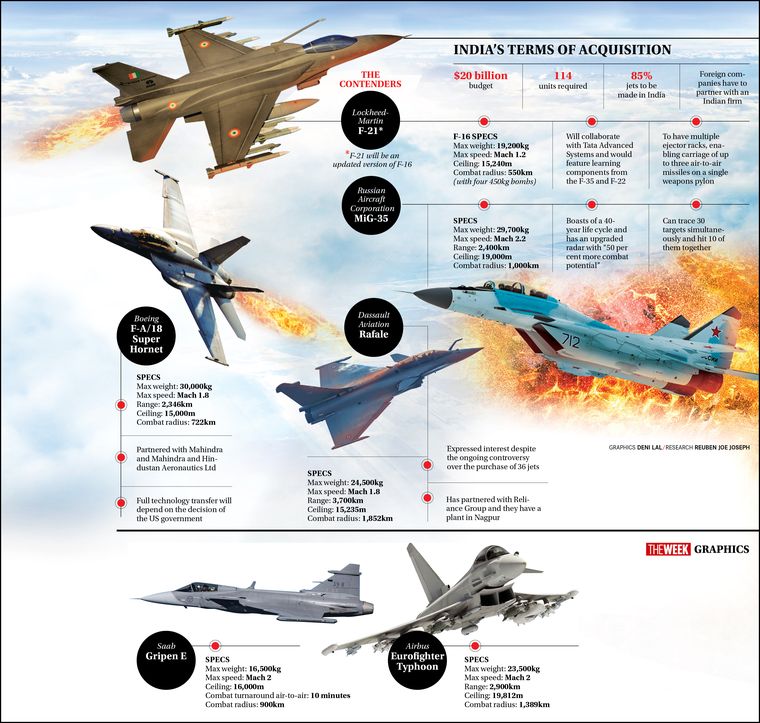 THOUGH THE 86-SECOND dogfight between the Indian Air Force’s MiG-21 and Pakistan Air Force’s F-16 along the Line of Control on February 27 was essentially a tussle between the neighbours, the platforms and weaponry used belonged to the world’s top aircraft and defence companies. The outcome could impact India’s choice of fighter jets.

The upgraded MiG-21 Bison was on combat air patrol at 15,000 feet when it spotted an F-16 Falcon at 8,000 feet approaching Indian airspace. Wing Commander Abhinandan Varthaman, pilot of the MiG-21, locked on the target at a 60-degree angle and launched the R-73 air-to-air missile, which hit the world’s most popular aircraft.

While the international media, dominated by the US, and the Pakistan military establishment questioned India’s claim of shooting down an F-16, the Indian side was over the moon with the success of its trusted Russian platform. The F-16 fell on Pakistan’s side of the LoC, and India’s lack of evidence raised questions. But Air Vice Marshal R.G.K. Kapoor of the IAF confirmed that a Bison had indeed shot down an F-16, and publicised the parts of an AIM-120C-5 long range missile that was fired by the PAF at an Indian military establishment but had missed the target. The AIM-120C is carried only on the PAF’s F-16s.

According to military observers, in the 51 years of the MiG’s existence, this is first time it had shot down an F-16. Missile misfiring from F-16 is also said to be rare. Air Vice Marshal Manmohan Bahadur, additional director general of India’s Centre for Air Power Studies (CAPS), claimed that it was the first time that a third-generation aircraft shot down a fly-by-wire modern aircraft armed with a much better weapons package and avionics suite.

The IAF is seeking to acquire 114 fighter jets, of which 85 per cent are to be built in India with a domestic strategic partner or production agency. The Lockheed Martin’s F-16, now upgraded to F-21, is in the race with five other aircraft including Dassault Aviation’s Rafale, Airbus’s Eurofighter, Saab’s Gripen E, Boeing’s F-A/18, and the MiG-35 from Russia.

Former air marshal M. Matheswa-ran, who evaluated top fighter jets for the proposed purchase of 126 jets during the UPA rule, claims that the latest dogfight would have Lockheed Martin worried. “It is going to be a challenge for the US government as well as the aircraft manufacturer to market [the F-21] globally, especially in India,” Matheswaran said. He said that the F-21 was similar to the F-16, and the change in name was just to create a psychological edge.

“The Indian leadership will not consider the F-16 anyway because the PAF is already flying it. And now that a conflict has taken place and India claims that an F-16 was shot down by a MiG-21, obviously it is not going to work happily for them,” said Matheswaran, who flew the MiG early on in his career.

Though experts said that the name MiG-21 resonates with the idea of a pre-Vietnam war era jet, the Indian Bison variant’s capabilities today surpass those of fourth-generation fighters of the 1970s and many of the 1980s and 1990s variants in a number of aspects. IAF officials claimed that another formidable feature of the Bison, perhaps its most potent asset, is the Israeli EL/L-8222 self-escort jamming pods, which make them extremely difficult to detect or target by radar. The fighters are also equipped with advanced Phazotron Kopyo radars, helmet-mounted sights and tactical data links—features usually found only in higher-end fourth generation fighters. They are also compatible with modern medium- and long-range air-to-air missiles such as the R-27 and R-77, possibly even the longer-range R-27ER variant, making them highly potent in, both, beyond-visual-range and visual-range engagements.

“The MiG-21’s new helmet-mounted sight and high-off-boresight R-73 missiles turned the aircraft into a great equaliser in the within-visual-range combat scenario,” explained an officer who wished to remain anonymous. “The coating reduces radar visibility. The plane’s life cycle and endurance have been prolonged.”

However, fighter pilots claimed that both platforms were not comparable. The MiG is a much older aircraft and the F-16 was a response to the MiG-21 threat in the Vietnam war. So, there is a generational difference. “The Bison itself is upgraded and quite competent. You do not evaluate the air combat situation by comparing only the technology of aircraft. Here, they intruded and the IAF chased them out by scrambling out air defence fighters or fighters on combat air patrol,” said the officer. “Bison was vectored from a higher height to a lower intruding aircraft. What matters there is who has the advantage, and who is in a position to shoot the missile first.”

While no country has criticised India for the strike at Balakot, none have acknowledged either that Pakistan used F-16s to attack India. However, India shared with the US details of the production number on the missile fired by the PAF on Indian military establishments to track the F-16 that was used. The US had sold F-16s to Pakistan on the conditions that it would not attack any country and would be allowed to use them only in self-defence and for anti-terror missions. But Indian observers said that the Americans would not like to accept that a Russian jet had shot down an American one.

“The reported downing of an F-16 by a MiG is an isolated, unique incident, and, as such, military planners should not broadly extrapolate policy and procurement lessons from this,’’ said Frank O’Donnell, non-resident fellow with the US-based Stimson Center’s South Asia Program. “Senior IAF officials have described MiGs as ‘flying coffins’, and there have been at least one or two crashes every year in recent years. The need for selection and induction of new platforms, on a far greater number than the 36 Rafales, remains unchanged.”

When asked about global challenge for the aircraft manufacturer, he admitted that a rethinking was urgently required. “OEMs (original equipment manufacturers) may have to expand their public lobbying efforts in India after this incident, but the limitations of the MiG platform remain clear to policymakers,” said O’Donnell, who is the author of India In Nuclear Asia: Evolution of Regional Forces, Perceptions and Policies.

However the man behind the machine matters a lot in a combat situation. “Training was the key. The R-73 missile was the second factor. It is among the best in the world in close combat. It is well integrated with the Bison avionics,” said former Air Vice Marshal Mohan John, who has flown MiG-21s and Mirage 2000s.

Laxman Behera, research fellow at the Institute for Defence Studies & Analyses (IDSA), an Indian military think tank, says, “Though it depends on the calibre of the pilot, radar and weapon systems, this event has changed the global attitude towards the F-16, which is the most widely used aircraft in the world.” He added that it was a perception war. “As the F-16 lost in the combat, it is a huge boost for the Russians,” said Behera.

However, a section of experts said that while praising the MiG-21, one should also remember the aircraft’s tendency to crash, killing at least 177 IAF pilots. While there is no doubt that Russian platforms are proven, they are lacking in maintenance and supply of spare parts.

“After the incident, neither the US government nor the OEM has said anything. They are sensing a big market in India as the tender for 114 aircraft is on. It is a tremendous pressure on the OEM as well as the US government. They have to do a lot of groundwork to contest with the F-21,” Behera said. The F-16, he said, has gone through at least 60 upgrades since its introduction. THE WEEK tried to contact Lockheed Martin, but its officials did not respond to emails and messages sent to them.