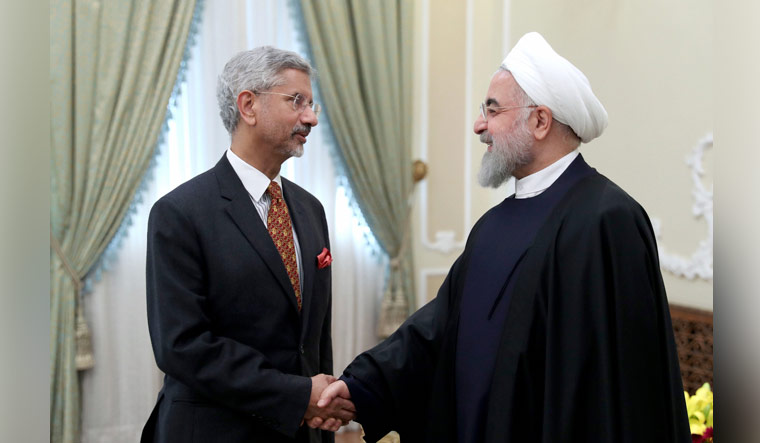 External Affairs Minister S. Jaishankar on Monday met Iranian President Hassan Rouhani and apprised him of the outcomes of the Joint Commission meeting and progress in the bilateral ties, a day after the two countries agreed to accelerate work on the strategic Chabahar project.

Jaishankar, who is in Tehran on a two-day visit, co-chaired the 19th Joint Commission Meeting with his Iranian counterpart Javad Zarif on Sunday during which the two sides agreed to accelerate work on the strategic Chabahar project.

"Thank President Dr. @HassanRouhani for so graciously receiving me today. Apprised him of the outcomes of the Joint Commission and progress in our bilateral ties," Jaishankar tweeted.

The Chabahar port—jointly being developed by India, Iran and Afghanistan—is considered a gateway to golden opportunities for trade with central Asian nations by the three countries. It is located on the Indian Ocean in the Sistan and Baluchestan province of Iran.

In May 2016, India, Iran and Afghanistan inked a pact which entailed establishment of Transit and Transport Corridor among the three countries using Chabahar port as one of the regional hubs for sea transportation in Iran, besides multi-modal transport of goods and passengers across the three nations.

The port on the energy-rich nation's southern coast is easily accessible from India's western coast and is increasingly seen as a counter to Pakistan's Gwadar Port, which is being developed with Chinese investment and is located at distance of around 80-km from Chabahar.

Jaishankar said he had a very good conversation on the regional and global picture with the Iranian foreign minister. "India and Iran will work together closely on their shared interests," he said.

In a statement, the Ministry of External Affairs said on Monday that the two ministers reviewed and positively assessed progress in bilateral cooperation, including connectivity, trade and commerce, cultural and people-to-people contacts. They also exchanged views on regional and global issues of mutual interest.

"They expressed satisfaction at the progress achieved in operationalisation of the Shahid Beheshti Port, Chabahar and recognised that it has a potential to act as a gateway between the Indian subcontinent, Iran, Afghanistan, Central Asia and Europe," it said.

The two leaders also welcomed the utilisation of the port for exports from Afghanistan and discussed ways to promote it for enhancing wider regional connectivity for trade and transit.

Both sides reiterated support for strengthening bilateral trade and commerce, the statement said, adding that it was agreed to hold early meeting of the Joint Working Group on Trade and to finalise Preferential Trade Agreement, Bilateral Investment Treaty, and promote cooperation in customs matters.

The two sides also shared concerns at the "grave threat posed by terrorism and called for immediate end to all support to terror sanctuaries."

"They agreed that State aid, abetment and support to terrorism should be condemned," the statement said.

"Both sides expressed support for efforts to maintain peace, security and stability in the region," it added.

On Monday, Jaishankar also met Admiral Ali Shamkhani, Secretary of the Supreme National Security Council of Iran, and held wide-ranging discussions with him on regional security and bilateral relations.

He met Roads and Urban Development Minister Mohammad Eslami to assess progress on the connectivity projects.

"Reaffirmed our shared determination to make speedier headway," he tweeted.

His visit to Iran comes days after the US provided a rare exemption to India from sanctions on the Chabahar port as Washington said it recognised that the strategic project was a lifeline for war-torn Afghanistan to get humanitarian supplies from India.

India and Iran also agreed to commemorate the 70th Anniversary of the bilateral Treaty of Friendship in 2020. Both sides would promote exchanges between the Parliamentarians, organize cultural festivals, promote people-to-people contact and youth exchanges, it added.

Prime Minister Narendra Modi had met Rouhani on the sidelines of the high-level 74th Session of the General Assembly in September.

India, the world's third-biggest oil consumer, meets more than 80 per cent of its oil needs through imports. Iran was its third-largest supplier after Iraq and Saudi Arabia till recently.