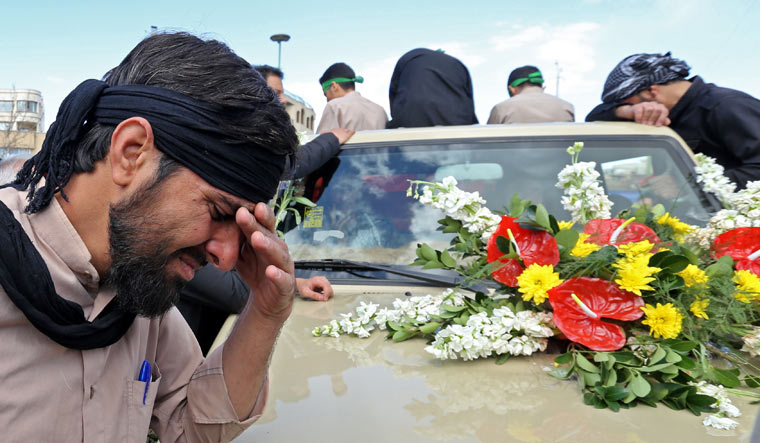 An Iranian man cries during the funeral of 27 Revolutionary Guards, who were killed in a suicide attack, in southeastern city of Isfahan | AFP

After India, Iran is now piling pressure on Pakistan over incidents of cross-border terror. Iran president Hassan Rouhani called for "decisive action by Pakistan against a militant group behind a deadly suicide attack in a border area", saying failure to act could jeopardise relations, reported Reuters.

Earlier, Iran's had Revolutionary Guards accused "Pakistan's security forces" of supporting the perpetrators of a suicide bombing that killed 27 troops. "Pakistan's government, who has housed these anti-revolutionaries and threats to Islam, knows where they are and they are supported by Pakistan's security forces," said Revolutionary Commander Major General Mohammad Ali Jafari, referring to jihadist group Jaish al-Adl ("Army of Justice"). "If (the Pakistan government) does not punish them, we will retaliate against this anti-revolutionary force, and whatever Pakistan sees will be the consequence of its support for them," he warned.

Rouhani called Pakistan Prime Minister Imran Khan on the phone. We are awaiting your decisive operations against these terrorists," IRNA quoted Rouhani as telling Khan. "We should not allow decades of friendship and fraternity between the two countries to be affected by the actions of small terrorist groups, the source of whose financing and arms is known to both of us," Rouhani said.