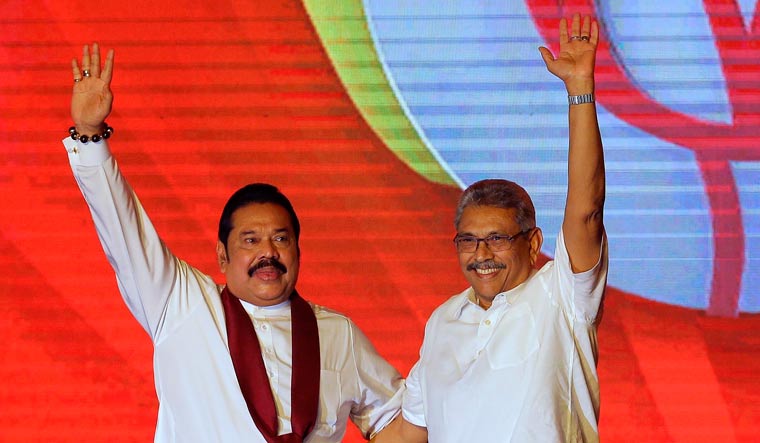 Exactly, a year after the political coup, Mahinda Rajapaksa is back in the Prime Ministers chair. On Wednesday, even as India's Foreign Minister Dr S. Jaishankar was in Sri Lanka to call on Mahinda, the political situation in the island nation began churning.

Mahinda, who is the opposition leader now, will assume duties immediately after Wickremesinghe steps down formally on Thursday. Along with Wickremesinghe, his ministerial colleagues, Mangala Samaraveera, Sajith Premadasa, Harsha, Champika, Kabir Hashim, Eran, Malik and others have also stepped down.

In a statement, Wickremesinghe said that he met President Gotabaya on Tuesday and discussed the future of Sri Lanka. However respecting the mandate of the people, he said, "I will step down to allow the new president to establish a new government. I will officially inform him of my decision tomorrow," he said on Tuesday.

Ranil along with Sirisena as the President was running unpopular during the past five years, as the SLFP-UNP combine could not keep up their promises. With Ranil stepping down, sources say his UNP might soon split or have a new leader in Sajith. Sajith after the debacle resigned as the deputy leader of UNP. Sources say Maithripala Sirisena, might switch camp to SLPP and join the Rajapaksas.

It may be recalled that Mahinda was appointed the Prime Minister on October 26, 2018, by the then President Maithripala Sirisena. He sacked Wickremesinghe, plunging the country into a political crisis. However, after two court orders, Mahinda resigned.

Sri Lanka has a semi-presidential system of government where both the President and Prime Minister have powers, with the prime minister responsible to the legislature and the president serving as the head of state and as the commander-in-chief of the armed forces.