Brother Shehbaz to take him as Nawaz's condition remains critical 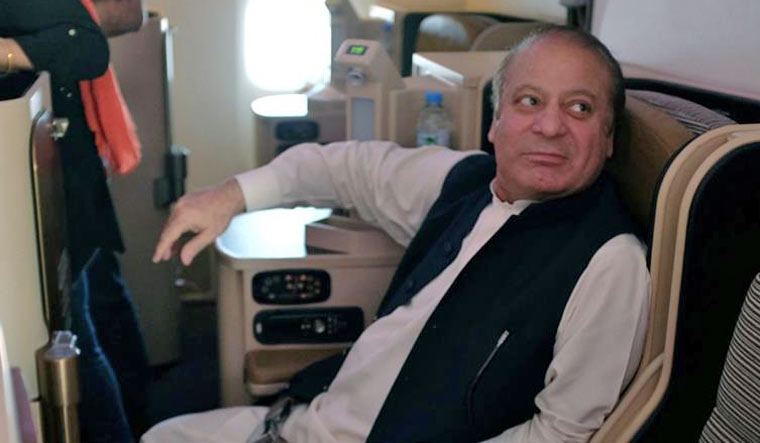 The 69-year-old PML(N) supremo agreed on Friday to go to London for the treatment, heeding doctors' advice and accepting his family's request, his daughter Maryam Nawaz told the media.

The Pakistan government has decided to let Sharif go abroad for treatment due to his critical medical conditions. Shehbaz, 68, will take his brother for medical treatment on Sunday, the Geo News reported, quoting sources.

The arrangements have been made for Sharif's treatment at Harley Street Clinic. Both Sharif and Shehbaz will take the Pakistan International Airlines (PIA) Sunday flight to London, the report said.

Sharif's family have contacted two doctors in London for the former prime minister's treatment. An appointment has been made for him at the Harley Street Clinic for Monday. The Sharif family are also talking to a doctor in New York, it said.

Shehbaz will accompany Sharif to London and he has already spoken to consultants at one of the Harley Street clinics where patients suffering form drop in platelets are treated privately, the report said.

A final decision will be made when Sharif is discharged from Services Hospital. He will be treated at Sharif Medical hospital in Jati Umra.

Earlier Speaking to the media on Friday, Maryam, 46, said the family could not risk  Sharif's health and has decided to send him abroad.

"Shehbaz Sharif is looking after all the boarding and lodging of the former premier. After losing my mother last year, my father is my everything now," a distraught Maryam told the ARY News.

Sharif's wife Kulsoom died of throat cancer in London last year. Maryam, who was released due to his critical health condition on bail on Wednesday by the Lahore High Court (LHC), said Sharif himself agreed to get the medical treatment abroad.

Sharif was shifted to his Jati Umra Raiwind residence in Lahore on Wednesday after his two-week stay at a Pakistani hospital for treatment of multiple diseases. He was admitted to the Services Hospital in Lahore on October 22 from Pakistan's anti-graft body's custody after his platelets dropped to a critical low level of 2,000.

A Sharif family member said on Friday that the former premier might leave for London this week if his name was removed from the Exit Control List by the government.

The government confirmed having received the application on Friday.

In Islamabad, Prime Minister's Special Assistant Naeemul Haq said on Friday the "government has no issue if he (Sharif) flies abroad for treatment".

Sources said the decision was taken in a meeting of Interior Minister Ijaz Shah with Prime Minister Imran Khan on Friday.

After the meeting, the government agreed to remove Sharif's name from the no-fly list, paving the way for his travel abroad.

Khan said that allowing Sharif to go out for treatment was not a concession as he would have to face the charges after recovering.

Sharif's medical reports were sent to doctors in London earlier and they have advised him to come to London for treatment as soon as possible.

However, Minster for Aviation Ghulam Sarwar alleged that Sharif's medical reports were manipulated to show him critically ill so that he could be allowed to leave the country.

"He (Sharif) has once again made a deal with the government like he did in 2000 (with the Pervez Musharraf government) to go out of the country," Sarwar alleged.

Sharif was arrested by Musharraf after toppling his government in 1999 but allowed him to go on exile to Saudi Arabia.

PML-N spokeswoman Marryium Aurangzeb called Sarwar's statement as "callous" and by someone who had no heart for an ailing person.

The Sharif family approached the Ministry of Interior, requesting the removal of Sharif's name from the ECL to pave way for the three-time prime minister to fly abroad for medical treatment.

Sharif suffered an angina attack during his hospitalisation and also suffers from diabetes.

Sharif was lodged in the Kot Lakhpat jail but last month he was sent to the custody of the National Accountability Bureau (NAB) which is probing the Sharif family in the Chaudhry Sugar Mills corruption case.

On December 24, 2018, an accountability court had sentenced Sharif to seven years in prison in the Al-Azizia Steel Mills corruption case and acquitted him in the Flagship case.

On October 25, the Lahore High Court granted bail to Sharif in the Chaudhry Sugar Mills case. He was undergoing treatment after being diagnosed with an acute immune disorder.

On October 29, the Islamabad High Court suspended Sharif's sentence in the Al-Azizia corruption case for eight weeks on medical grounds.

The Sharif family has denied all corruption charges and termed them as politically motivated.