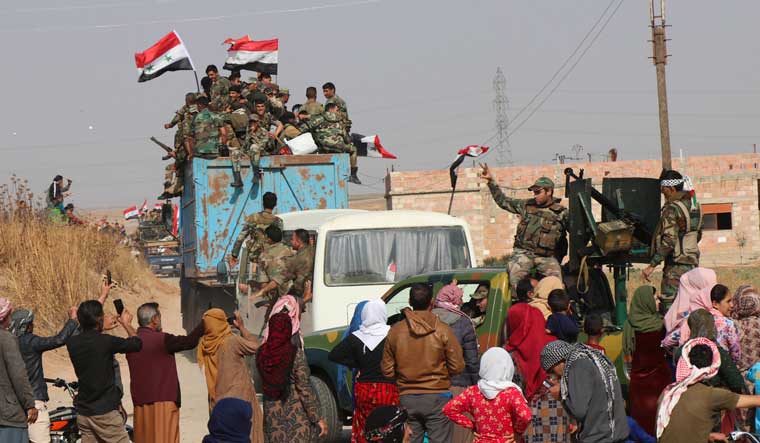 Clashes in northeast Syria between pro-Ankara fighters backed by the Turkish air force and a Damascus-backed force led by Syrian Kurds have left 15 dead, a monitor said.

Rami Abdel Rahman, head of the Syrian Observatory for Human Rights, said that nine pro-Turkish fighters and six members of the Kurdish-led Syrian Democratic Forces (SDF) were killed in a zone between the towns of Tal Tamr and Ras al-Ain.

State news agency SANA said earlier Syrian government forces had entered the provincial borders of Ras al-Ain near Turkey's border on Saturday, an area that was taken by Turkish forces in the latter's weeks-long offensive against Syria's Kurds.

The Observatory said the Syrian government's deployment there was its largest in years.

Syrian government troops had also deployed along a road stretching some 30 kilometres (18 miles) south of the frontier, SANA said.

Turkey and its Syrian proxies on October 9 launched a cross-border attack against Kurdish-held areas, grabbing a 120-kilometre-long (70-mile) swathe of Syrian land along the frontier.

The incursion left hundreds dead and caused 300,000 people to flee their homes, in the latest humanitarian crisis in Syria's brutal eight-year war.

Turkey and Russia this week struck a deal in Sochi for more Kurdish forces to withdraw from the frontier on both sides of that Turkish-held area under the supervision of Russian and Syrian forces.

On Saturday, the Britain-based Observatory said some 2,000 Syrian troops and hundreds of military vehicles were deploying around what Turkey calls its “safe zone”. Government forces were being accompanied by Russian military police, the Observatory said.

Moscow has said 300 Russian military police had arrived in Syria to help ensure Kurdish forces withdraw to a line 30 kilometres (18 miles) from the border in keeping with Tuesday's agreement.

Under the Sochi deal, Kurdish forces have until late Tuesday to withdraw from border areas at either end of the Turkish-held area, before joint Turkish-Russian patrols start in a 10-kilometre (six-mile) strip there.

Ankara eventually wants to set up a buffer zone on Syrian soil along the entire length of its 440-kilometre-long border, including to resettle some of the 3.6 million Syrian refugees currently in Turkey.

The SDF has objected to some provisions of the Sochi agreement and it has so far maintained several border posts.

Turkish President Recep Tayyip Erdogan warned Saturday that Ankara would “clear terrorists” on its border if the Kurdish forces, which his country view as an offshoot of its own banned insurgency, did not withdraw by the deadline.