An extraordinary letter emerged in which Trump warned Erdogan: "Don't be a fool" 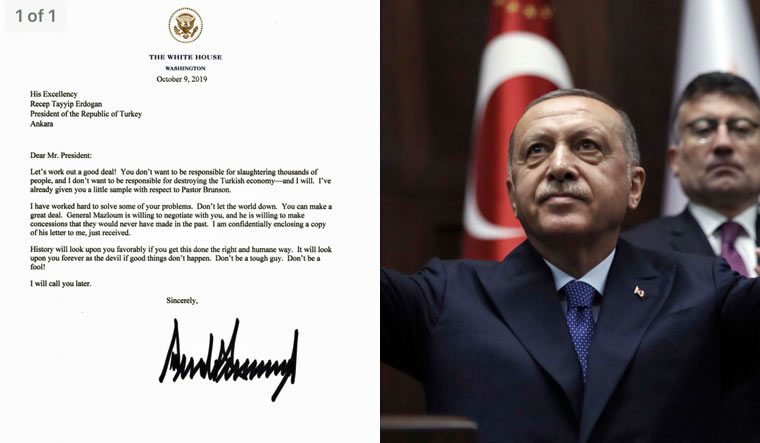 President Recep Tayyip Erdogan vowed on Wednesday that Turkey's operation would continue, despite US President Donald Trump demanding a ceasefire. The offensive was facilitated by the withdrawal of US troops from northern Syria.

Erdogan's declaration came as an extraordinary letter emerged in which Trump warned Erdogan: "Don't be a fool".

Erdogan said the only way to solve Syria's problems was for the Kurdish forces to "lay down their arms... destroy all their traps and get out of the safe zone that we have designated".

President Trump dispatched his deputy Mike Pence to Turkey to demand a ceasefire in Syria, as Ankara rebuffed international pressure to curb its deadly offensive against Kurdish forces.

Turkey's enmity with the Kurds dates to The Kurdistan Workers' Party or PKK, who, in its terror campaign against Turkey, that has been going on for more than 30 years, has been responsible for the deaths of 40,000 people, including women, children and infants.

Syria's main Kurdish force, the People's Protection Units, according to Turkey is a “terrorist” offshoot of the outlawed Kurdistan Workers' Party, which has waged a bloody insurgency inside Turkey since 1984. 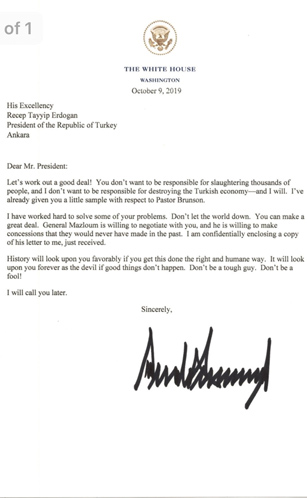 "The PKK, which is a part of the Kurds, as you know, is probably worse at terror and more of a terrorist threat in many ways than ISIS," US President Donald Trump had said.

Trump's letter to Erdogan was sent the day Turkey launched its incursion into northeastern Syria, Trump said history risked branding him a "devil".

Congressmen in the meantime, do not seem happy with Trump's actions at Syria. Congressman Mike Levin tweeted, “Today in the House, we voted 354-60 to condemn Trump’s actions with regard to Syria.”

Kurdish forces, on Wednesday, struck a desperate deal with Damascus and stepped aside to allow Syrian regime troops and allied Russian soldiers enter the border town of Kobane, according to the Syrian Observatory for Human Rights.

Kobane is a highly symbolic town for Syria's Kurds, whose forces had in 2015 wrested it from the Islamic State group in an epic battle backed by the US-led coalition.

Head of the Kurdish-led Syrian Democratic force, Mazloum Abdi told Kurdish television channel Ronahi it would make do with “defensive” operations against the group, which maintains sleeper cells and a presence in Syria's vast desert despite its territorial defeat. The group also added that they were “freezing” operations against IS.

Since launching their assault on October 9, Turkey and its Syrian rebel proxies have secured more than 100 kilometres of the border, but Ras al-Ain has held out.

Days after American troops abruptly began withdrawing, clashes continued across the region, with Kurdish fighters in the border town of Ras al-Ain burning tyres in a bid to blind Ankara's warplanes and digging in against a ground offensive by Turkish-backed Syrian rebels.

The Turkish operation has triggered a flurry of diplomacy among major powers.

Facing a barrage of criticism in Washington for abandoning the Kurds, Trump has imposed sanctions on three Turkish ministers and raised tariffs on its steel industry.

Trump again dismissed the idea that pulling out 1,000 troops had been a betrayal of Kurdish militants who bore the brunt of the fight against IS in recent years. The Kurds, however, called the act a 'stab in the back'.

“The Kurds are very well protected,” Trump told reporters at the White House.

He also said, “By the way, they are not angels,” and called the decision “strategically brilliant” for the US.

Europe has taken an increasingly tough line with Turkey and several countries, including Britain, France and Germany, have imposed arms embargoes on Ankara over the operation.

The UN Security Council warned in a unanimously adopted statement of a risk of “dispersion” of jihadist prisoners. While Moscow had stepped in to fill the void left by US' withdrawal of troops, Qatar, on Wednesday, defended Turkey's move to launch an offensive attack against Syria.