Trump imposes sanctions on Turkey; US prepared to 'swiftly destroy' its economy

On Wednesday, Ankara launched a cross-border assault on Kurdish fighters 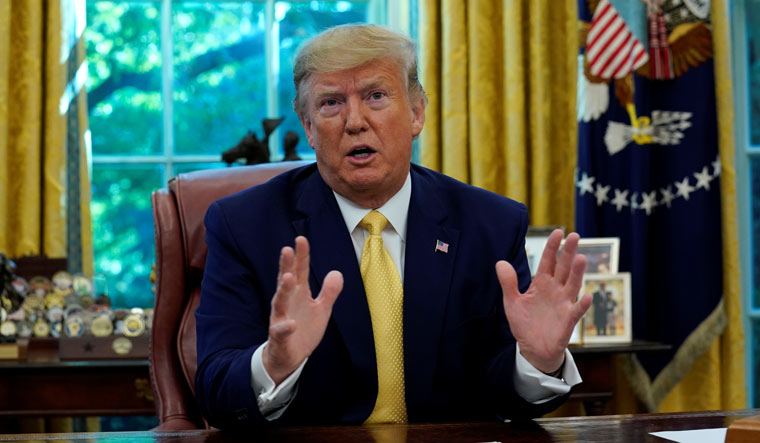 Trump has signed an executive order that empowers his administration to slap sanctions on Turkey.

The treasury department has already placed Turkish Defence Minister Hulusi Akar, Interior Minister Suleyman Soylu and Energy Minister Fatih Donmez on its sanctions list, while Trump in a letter to Speaker Nancy Pelosi of the US House of Representatives has declared the Turkey issue a national emergency.

On Wednesday, Ankara launched a cross-border assault on Kurdish fighters after the US decided to withdraw troops from Syria, a move criticised by the Republicans, with some terming it a "betrayal" of the Kurds.

Turkish forces and their proxies pushed deep into Syria on Sunday, moving closer to completing their assault's initial phase, while Washington announced it was pulling out 1,000 troops from the country's north. The Kurdish administration in northern Syria said that Turkish bombardment near a camp for the displaced led to nearly 800 relatives of Islamic State group (IS) members fleeing.

The Kurdish administration in northern Syria on Sunday announced a deal with the Damascus government on a Syrian troop deployment near the border with Turkey to confront Ankara's offensive.

The Syrian Observatory for Human Rights said at least 26 civilians were killed on Sunday in northeast Syria, including an unidentified journalist who died in an air strike on a convoy of vehicles transporting civilians and journalists. At least 60 civilians have now died in violence on the Syrian side of the border, with Turkish reports putting the number of civilians dead from Kurdish shelling inside Turkey at 18.

The UN humanitarian agency OCHA said the exodus sparked by the fighting had grown to 130,000 people and it was preparing for that figure to more than triple.

"We have moved into a planning scenario where up to 400,000 people could be displaced within and across the affected areas," spokesman Jens Laerke told AFP.

Some 12,000 IS fighters—Syrians, Iraqis as well as foreigners from 54 countries—are detained in Kurdish prisons, according to official Kurdish statistics.

"This [executive] order will enable the US to impose powerful additional sanctions on those who may be involved in serious human rights abuses, obstructing a ceasefire, preventing displaced persons from returning home, forcibly repatriating refugees or threatening the peace, security or stability in Syria," Trump said in a statement.

Turkey's military offensive is endangering civilians and threatening peace, security and stability in the region, he said, adding that he has been perfectly clear with his Turkish counterpart that his action is precipitating a humanitarian crisis and setting conditions for possible war crimes.