The move was part of the global 'Girls Take Over' campaign 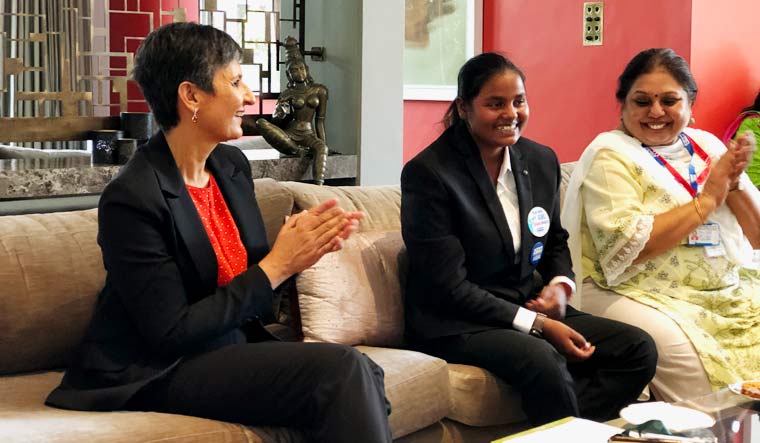 Australia appointed a new envoy to India on Friday, as 20-year-old Anjali took over as the Australian High Commissioner from Harinder Sidhu for a day. A footballer and a change-maker with Plan India, Anjali was appointed as part of the global 'Girls Take Over' campaign' to mark the Day of the Girl Child on October 11.

A leader in her community, Anjali—dressed identically to Sidhu in a black pantsuit—has worked to empower young girls to dream and follow their dreams. For many of these girls, the first step is just being allowed to step out of their homes.

“It is expected that women will remain within the confines of their house,’’ says Anjali, adding, “Earlier I couldn’t even think of a career.’’ Today, Anjali pursues a bachelor's degree and dreams of joining the forces one day.

Sports is one area that PLAN has focused on to help young women reclaim spaces as well as gain confidence. From badminton to soccer and even cricket, girls are coming out to play against boys, not only to win matches but also to prove a larger point: That they are equal. “Girls were not allowed to play,’’ she says. “The last match we played, we won. The village gave us a great welcome.’’

In a country where many schoolgoing girls dropout of their education before completing it, Anjali’s village is now dropout free. She has also managed to eradicate child marriage. “Our panchayat is child marriage free,’’ she beamed. “When we heard of a wedding, we go and check the Aadhar cards of the couples, to see their age.” If the couple is too young—as they were in two cases—the first step is to counsel the parents. If that does not work, the police are then brought in.

This is the second year that the Australian High Commission is participating in this programme. Last year, Pari from Jharkhand spent the day being Australia’s top diplomat for a day.

Like Pari, Anjali too had a busy day ahead of her. She began the day hosting a high tea with women achievers in the morning. An all-staff meeting followed. In the afternoon, Anjali attended a friendly football match played between the High Commission women staff and the girls from NGO CEQUIN.