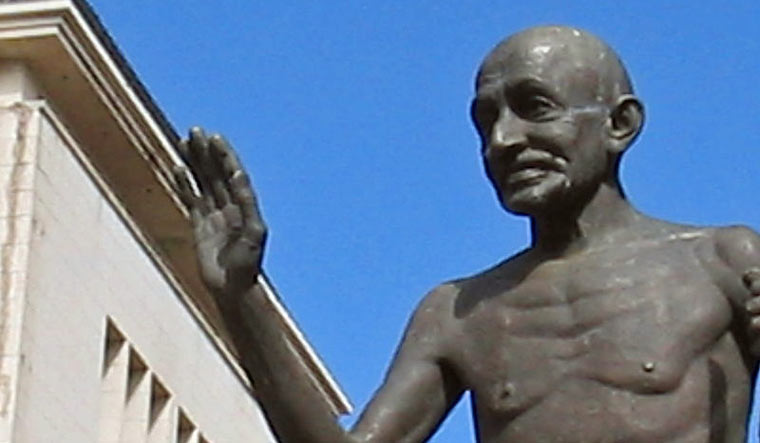 Statues and busts of Mahatma Gandhi commemorating the key role he played in helping fight the oppression and discrimination in South Africa during the apartheid era are abound across the country, inspiring the younger generations to imbibe his ideals.

While most of of his statues in South Africa show Gandhi's traditional bald-headed, bespectacled, dhoti-clad image, the most significant ones that reflect his arrival in the country as a young lawyer are in Pietermaritzburg and Johannesburg.

Pietermaritzburg is the place where Gandhi as a young lawyer was unceremoniously thrown off a train compartment reserved for white people, inspiring his path of 'Satyagraha'.

In June 2018, late Sushma Swaraj, who was then External Affairs Minister, unveiled a unique two-side bust of Gandhi in Pietermaritzburg.

"One side of (the bust) features Gandhi the lawyer in the Western attire he wore when he came to South Africa, while the other side shows Mahatma Gandhi in his Indian dress in which he left South Africa after 21 years, returning to transform India," India's High Commissioner Ruchira Kamboj explained.

"Mahatma Gandhi and Nelson Mandela gave hope to those facing injustice and discrimination," Swaraj said on the occasion as she recalled India's role at international fora to help South African people in their fight against apartheid.

In the heart of Johannesburg's central business district, a public transport hub was renamed Gandhi Square in 1999. The square features a life-size statue of Gandhi, resplendent in his legal robes. The statue is opposite the building which housed the legal office he once had in the city.

A bust of Gandhi at the Phoenix Settlement, started by Gandhi, is a popular tourist attraction.

During his two-day visit to South Africa in July 2017, Prime Minister Narendra Modi made it a point to visit the Phoenix Settlement.

In May 2012, a bust of Gandhi was unveiled by the then Indian President Pratibha Patil and South African Chief Justice Mogoeng Mogoeng at Constitution Hill in Johannesburg, built on the site which was once the Fort prison, where both Gandhi and Mandela were once imprisoned.

"This is the place where Gandhiji served four terms of imprisonment between 1908 and 1913, including his very first sentence in South Africa in this Number Four Cell," Patil told the gathering of veteran activists and leaders from the community.

Mogoeng said that despite the numerous times that Gandhi was assaulted, arrested and imprisoned, he refused to sacrifice his values and his ideals.

A life-size statue of Mahatma was unveiled in Rustenburg city in North-West Province in September 2015 alongside that of his one-time nemesis and former Transvaal Boer Republic President Paul Kruger.

"Back in 1893, newly-arrived in South Africa, a young M K Gandhi was kicked off the footpath by a constable outside the home in Pretoria of President Paul Kruger," historian and Gandhian scholar Eric Itzkin said.

"The unveiling here at Kedar Heritage Lodge, on the site of Kruger's farm, of a statue of Gandhi feels like an act of historical recognition and restitution, even if it comes rather late, and carrying with it a sweet touch of irony," he said.

The Trade Route Mall in the sprawling largely Indian township of Lenasia, south of Johannesburg, is believed to have the only statue of Gandhi anywhere in the world that is situated right inside the centre of a shopping mall.

Originally installed there as a temporary measure in 2011, the management of the centre decided to make it a permanent feature. Thousands of shoppers of all communities pass the statue every day.

At the nearby Gandhi Hall, another life-size statue of Gandhi is encased in glass at the venue which was built after the original Gandhi Hall in Central Johannesburg was demolished by apartheid-era authorities who forcibly resettled the community from there to Lenasia.

The latest bust of Gandhi has been installed at the Tolstoy Farm by the Gandhi Remembrance Committee, headed by veteran community worker Mohan Hira, who has spearheaded the revival of the once-thriving area that left desolate after decades of vandalism and neglect.

The bust of Gandhi shares space alongside one of Mandela.

Tolstoy Farm was a community started by Gandhi in Transvaal, South Africa, in 1910. It became the headquarters of the campaign of satyagraha (non-violence) which he lead at that time.