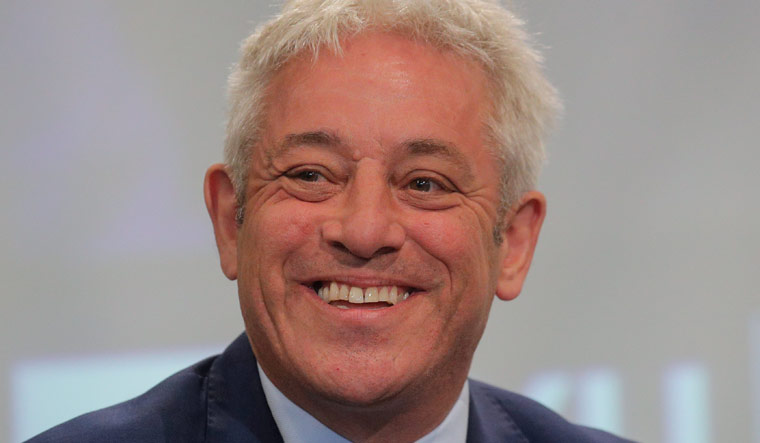 Britain's Speaker of the House of Commons, John Bercow | Reuters

If PM Boris Johnson loses a court case over prorogation, Speaker John Bercow could be given the power to recall Parliament against Johnson’s wishes. The announcement will be made next week by the Supreme Court on whether or not the prorogation was unlawful.

There are five possible decisions the court could make, ranging from an acceptance that judges have no right to intervene in prorogation to a ruling that Parliament has not been legally prorogued as yet.

A decision against Johnson could complicate his attempts to ram any deal that he does clinch with Brussels through parliament once its returns on October 14.

European Commission chief Jean-Claude Juncker said in the meanwhile that Brussels could drop the so-called “backstop” solution for Brexit's Irish border dilemma if Britain came up with a fail-safe alternative.

Johnson had come to power on the promise that he would deliver Brexit by October 31. Speaker Bercow announced that he would resign from his post on October 31, the day UK is slated to exit EU. Bercow said in his Thursday speech that it was "astonishing" that anyone entertained the idea of Johnson disobeying the law [prorogation of the parliament], as such a move "would be the most terrible example to set to the rest of society.”

While Johnson has maintained that his decision was a routine move that allowed the government to start a new parliamentary session with a fresh legislative agenda; Critics have called it an audacious manoeuvre to reduce the amount of time available to the opposition to block a no-deal Brexit. And ever since Johnson announced his decision to suspend the parliament, he has lost his working majority in Parliament and failed to secure a new election.

"There was, and is, no practical reason for a prorogation for what is, in modern times, an extraordinary length of time," Lord Carloway, Scotland's most senior judge, told another media outlet.

UK Brexit Minister Stephen Barclay in the meantime said, “The prime minister returned from talks with President Juncker in Luxembourg on Monday with assurances that negotiations will intensify.”

The latest salvo in the ongoing war of words between London and Brussels was fired despite reports of feverish negotiations being held in various European capitals. “If the objectives are met — all of them — we don't need the backstop,” Juncker said. “If the results are there, I don't care about the instrument.” The British government spokesman said London has submitted “a series of confidential technical non-papers” with its thoughts on the dispute. Technical “non-papers” are documents used in negotiations that do not represent a formal position.

A European source said the Brexit timetable will also be discussed at a meeting between Johnson and Juncker on the margins of the UN General Assembly in New York next week.

We "know that this case must be resolved as quickly as possible and we hope to be able to publish our decision early next week," Supreme Court President Brenda Hale said.