The opposition has branded Maduro, a "usurper" over his re-election last year 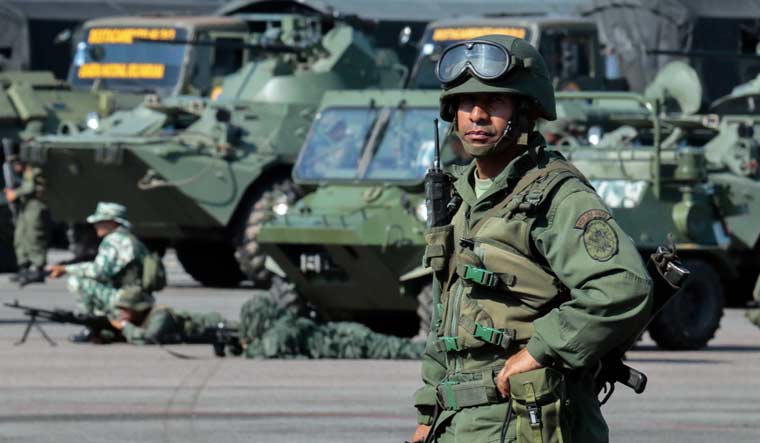 After Venezuela began military activity at its border, Colombia and 11 other member nations of the Organization of American States voted to urgently hold a meeting of a regional defence pact.

Opposition leader Juan Guido too, voted for the meeting, stating that Venezuelan President Nicolas Maduro's regime is “a clear threat to peace and security” in the region.

The United States has invoked a regional defence pact with 10 other countries and Venezuela's opposition after "bellicose" moves by Nicolas Maduro's regime.

A request to invoke the Inter-American Treaty of Reciprocal Assistance (TIAR) came after “bellicose” moves by President Maduro.

"Recent bellicose moves by the Venezuelan military to deploy along the border with Colombia as well as the presence of illegal armed groups and terrorist organizations in Venezuelan territory demonstrate that Nicolas Maduro not only poses a threat to the Venezuelan people, his actions threaten the peace and security of Venezuela's neighbours," US Defence Secretary Pompeo said.

Venezuela plunged into a political crisis in January when opposition leader Juan Guaido declared himself acting president, in a direct challenge to Maduro's authority over the country from which millions have fled economic deprivation. Caracas declared an orange alert earlier this month after repeated accusations from Bogota that Maduro would be colluding with the guerilla group ELN and “Ivan Marquez,” the former peace negotiator of the FARC, another guerilla group.

The opposition has branded Maduro, the socialist leader a "usurper" over his re-election last year in a poll widely viewed as rigged.

Pompeo said in the statement that invoking the TIAR is "recognition of the increasingly destabilizing influence" the Maduro regime has in the region.

"We look forward to further high-level discussions with fellow TIAR parties, as we come together to collectively address the urgent crisis raging within Venezuela and spilling across its border through the consideration of multilateral economic and political options," he added. The US and more than 50 countries have recognized Guaido.

Other countries that have agreed to re-invoke the pact include Chile, Dominican Republic, El Salvador, Guatemala and Brazil among others.