Glory to Hong Kong: The new anthem embraced by protesters 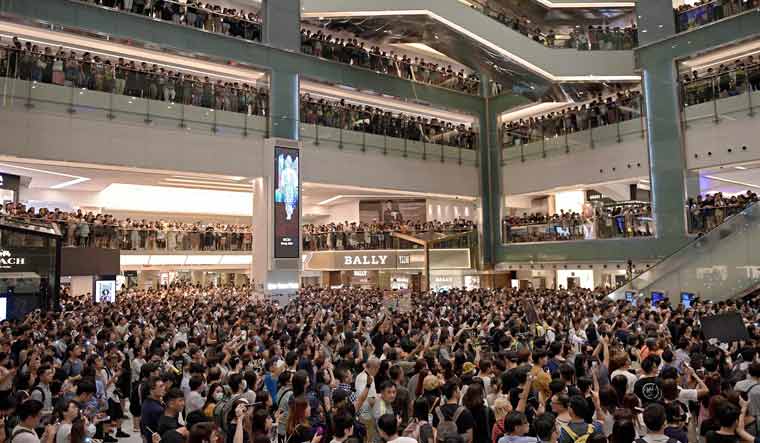 People gather at a shopping mall in the Sha Tin area of Hong Kong on September 11, 2019, to sing a recently penned protest song titled 'Glory to Hong Kong | AFP

Hundreds of pro-democracy protesters gathered at a city mall to sing a recently penned anthem for Hong Kong. Activists have declared the recently penned song as the territory's new anthem. It has been belted out by protesters at flashmobs in malls, on the streets and in the football stands.

"Glory to Hong Kong" first appeared on YouTube on 31 August and has quickly won a huge following among those pushing for greater democratic freedoms in the semi-autonomous Chinese city.

Activists gathered at a mall in the Sha Tin area to sing the song on Wednesday night.

The original version has racked up more than 1.3 million views in less than a fortnight while multiple copycat videos have been made — including one featuring an entire orchestra decked out in the helmets, goggles and gas masks worn by those on the barricades.

"For all our tears on our land/Do you feel the rage in our cries," the latest song begins. "Rise up and speak up, our voice echoes/Freedom shall shine upon us".

Each night this week protesters have gathered at different malls across the city for impromptu flashmob concerts.

The song, along with the Christian hymn "Sing Hallelujah to the Lord", is a riposte to the city's unelected leaders and Beijing after more than three months of huge and sometimes violent protests.

The composer is known by the pseudonym "Thomas dgx yhl". Not much is known about him.

On Tuesday, thousands of Hong Kong football fans defied the Chinese national anthem and started singing the new anthem when the match began.

Insulting China's flag and the anthem is banned on the mainland and Hong Kong's local government are currently trying to pass a similar law.

According to critics, the move is another blow to the free speech guarantees Hong Kongers enjoy under the handover deal China agreed with Britain.

Christopher Chung, 22, said he planned to sing the new protest song over China's communist anthem "March of the Volunteers".

"I think the respect people pay when singing a national anthem should come out from one's heart, instead of using law and rules to force people to respect it," he said.

"We really dislike the Chinese national anthem," added Billy, 16, who declined to give his surname. "That's why we want to sing an anthem that belongs to Hong Kong."

Protests in Hong Kong that has been going on for three months now, was sparked by a widely reviled plan to allow extraditions to the mainland. It has now snowballed into a wider movement pushing for democracy and police accountability.

Antony Dapiran, a Hong Kong-based lawyer who has written a book on the city's protest movements, said songs sung in 2014 were characterised by optimism that things might change.

During 2014's pro-democracy Umbrella Movement protests, the three most popular protest songs were "Do you hear the people sing", from the musical "Les Miserables", "Raise the Umbrellas" — a track written for the movement by a group of Cantonese pop-stars — and "Boundless Oceans, Vast Skies", a famous ballad by Hong Kong rock band "Beyond" from the early 1990s.