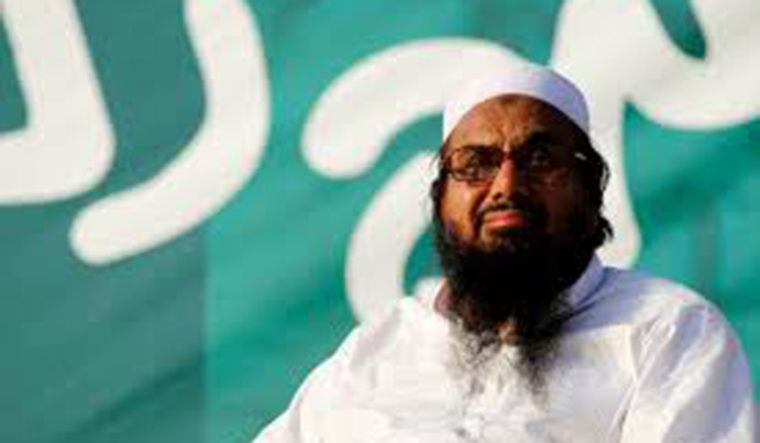 Terrorist Hafiz Saeed, the mastermind behind the 26/11 attacks in Mumbai, has been arrested from Lahore and sent to judicial custody, Pakistan media reported on Wednesday.

According to CTD sources, Saeed was on his way to an anti-terrorism court (ATC) in Gujranwala to seek bail, reported Dawn. A JuD spokesperson confirmed the arrest to Reuters.

Soon after the arrest, Saeed was presented before an Anti-Terrorism Court in Gujranwala that granted his judicial remand. He was subsequently shifted to Lahore's high-security Kot Lakhpat jail where former prime minister Nawaz Sharif is lodged, the official said.

The news of the arrest comes just two days after Hafiz Saeed and his three aides were granted pre-arrest bail on Monday by an anti-terrorism court in Pakistan, which stopped police from arresting them till August 3 in a land grabbing case for a seminary. On July 3, 13 leaders of the banned JuD, including Saeed, were booked in nearly two dozen cases for terror financing and money laundering under the Anti-Terrorism Act, 1997.

Under pressure from the international community, Pakistani authorities have launched investigations into matters of the LeT, the JuD and its charity wing the Falah-e-Insaniat Foundation (FIF) regarding their holding and use of trusts to raise funds for terrorism financing.

The development comes just days ahead of Pakistan Prime Minister Imran Khan's maiden visit to the US on July 21 during which he will hold talks with US President Donald Trump. Trump has repeatedly asked Pakistan to abide by its UN Security Council commitments to deny terrorists safe haven and block their access to funds.

Saeed's arrest is also being seen as a pressure on Pakistan in connection with its commitment to the Financial Act Task Force (FATF) whose next deadline is in October.

Since the Khan government has taken control of the JuD and the FIF properties including seminaries and mosques across the country following international pressure built up after the deadly Pulwama attack, Saeed was keeping a low profile at his Lahore's Jauhar Town residence. He was even barred from entering the JuD headquarters in Lahore and Muridke.

Saeed-led JuD is believed to be the front organisation for the Lashkar-e-Taiba which is responsible for carrying out the 2008 Mumbai attacks that killed 166 people. The US Department of the Treasury has designated Saeed as a Specially Designated Global Terrorist, and the US, since 2012, has offered a $10 million reward for information that brings Saeed to justice.

Under pressure from the international community, Pakistani authorities have launched investigations into matters of the JuD, LeT and the FIF regarding their holding and use of trusts to raise funds for terrorism financing.