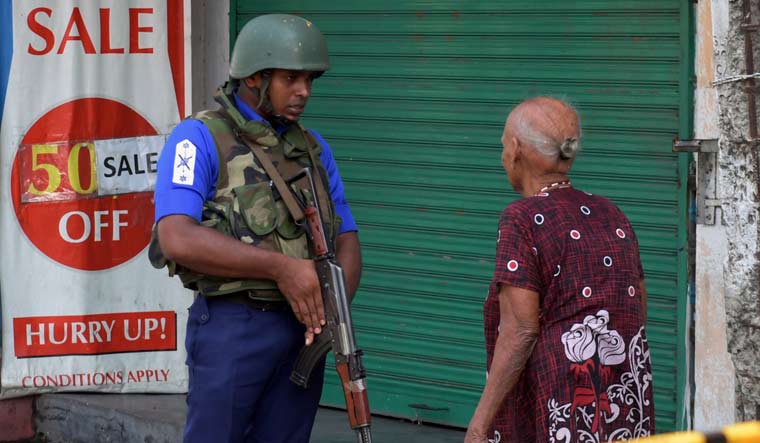 Sri Lankan police on Sunday imposed a curfew with immediate effect in the country's western coastal town of Chilaw, after a mosque and a few shops owned by Muslims were attacked by a mob, authorities said.

The curfew has been imposed till 6am Monday as a precaution, the police said.

Additional troops have been deployed in the city to bring the situation under control, they said.

Tensions between Catholics and Muslims has been brewing since Saturday in the Christian dominated town. This is a fallout from the Easter Sunday attacks in which over 250 people were killed.

Nine suicide bombers, including a woman, carried out a series of devastating blasts that tore through three churches and three luxury hotels, killing 258 people and injuring over 500 others on the Easter Sunday.

The Islamic State claimed responsibility for the attack, but the government has blamed local Islamist extremist group, the National Thawheed Jama'ath (NTJ), for the bombings.

Some inflammatory exchanges happened between the two communities in the town since Saturday, residents said. A Catholic woman claimed that she was threatened inside a Muslim-owned shop.

Cardinal Malcolm Ranjith, the Archbishop of Colombo, cancelled all masses since the Easter Sunday until the security situation could improve.

It was just this morning that churches resumed their normal Sunday services since the attack.

Early this month, several people were injured in clashes between Muslims and Christians in Negombo, a majority Christian town where St. Sebastian's Church was targeted during the Easter attacks.

After clashes in Negombo, Cardinal Ranjith appealed to Christians and other communities to show restraint.

"Therefore please avoid hurting them and try to create a better spirit of understanding and good relations between all the communities of Sri Lanka."

In his address to the nation after the Easter Sunday blasts, President Maithripala Sirisena called on the public to refrain from looking at the Muslim community with a suspicious eye following the attacks.

"It was only a small group which had engaged in such acts of terror," he added.

Sri Lanka has a population of 21 million which is a patchwork of ethnicities and religions, dominated by the Sinhalese Buddhist majority.

Muslims account for 10 per cent of the population and are the second-largest minority after Hindus. Around seven per cent of Sri Lankans are Christians.