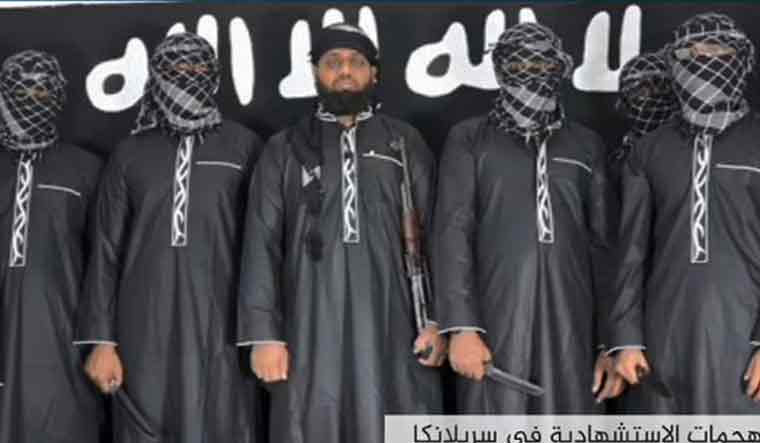 An image grab taken from a press release issued on April 23, 2019 by the Islamic State (IS) group's propaganda agency Amaq, allegedly shows five of the eight men it said carried out a string of deadly suicide bomb blasts on Easter Sunday in Sri Lanka, lined up at an undisclosed location. The man in the centre is believed to be Zahran Hashim, who was identified by the Sri Lankan police as the leader of the Islamist National Thowheeth Jama'ath (NTJ) group, which Colombo has blamed for the attacks | AFP

Days after a series of blasts ripped through Sri Lanka on Easter Sunday, President Maithripala Sirisena on Friday confirmed that Zahran Hashim, the mastermind behind the attacks, was killed inside the Shangri La hotel were he detonated himself.

Sirisesna said that Hashim led the attack at the five-star hotel along with another bomber Ilham.

Thirty-eight-year old Hashim from Kattankudy near Batticaloa in Eastern Sri Lanka was the ring leader of the attacks. Hashim was reportedly opposed by many from the Muslim community in Kattankudy for his hard line religious inclinations in the last few years. Hashim was a radical preacher and had even set up his own radical mosque in Kattankudy a few years ago. Always vociferous and aggressive in his thoughts and lectures, he even demanded that Sharia laws be implemented in Sri Lanka.

“In Kattankudy, there were religious courts being set up where punishments were given under the Sharia laws. But no one noticed it. There were several radical groups that sprung up in Kattankudy saying hijabs were a must for women and halal food would have to be consumed. This was not the case among the Muslims in Sri Lanka until a few years ago,” said a former senior army officer.

In fact, Kattankudy residents feared Hashim for his extremist views. There were even protests against him by the local Muslims. Sources said the Ulamas from some of the mosques in Kattankudy even brought out a detailed list of Muslims with similar extremist views. The list was submitted to the security agencies, but was ignored.

However, Hashim's extremist views and fiery speeches had found takers among some young men from the Muslim community. In fact, there were instance when, during his address at the local mosque, Hashim demanded that Sharia laws such as cutting off hands for stealing and stoning for adultery should be practised as in Saudi Arabia. However, no one took him seriously as most of them were of the opinion that Muslims were a minority in Sri Lanka and cannot live like in Saudi Arabia.

Reportedly, in 2007, after Hashim was expelled from a tableeghi school for arguing with teachers, he had left Kattankudy. He moved to Colombo and then reportedly to a foreign country to enrol himself in a religious school.

But in 2014, Hashim returned to Kattankudy with an Arabic certificate and began preaching aggressively among the youngsters. And soon, despite several objections from his own community, he founded the National Thowheeth Jamath (NTJ).

According to police officials, NTJ is an obscure, little-known organisation. “We still do not know if it had international links. There are at least eight Thowheeth Jamaths in Sri Lanka. The first one was All Ceylon Thowheeth Jamath. This is also one splinter group, which the authorities failed to notice and keep in its radar,” said the former army chief.

In fact, according to sources, NTJ is a breakaway faction of the Sri Lanka Thowheeth Jamath (SLTJ). In February 2018, the Sri Lankan government was even forced to declare an emergency when the majority Sinhalese were attacked by Muslims in Kandy. The Sinhalese retaliated against the Muslims, destroying their properties and businesses. A young Muslim man was killed during the riots. Months after the riots, NTJ slowly emerged to prominence.

Incidentally, a year ago, Hashim was named as the first accused in the Mawanella attacks when a Buddha statue was vandalised. Hashim had reportedly instigated the violence by cutting off the head of the Buddha statue in Mawanella. He was detained and later let off after a brief inquiry, according to sources. In addition, it is to be noted that NTJ’s secretary Abdul Razak was arrested by the Sri Lankan authorities several times over the past one year for instigating violence.