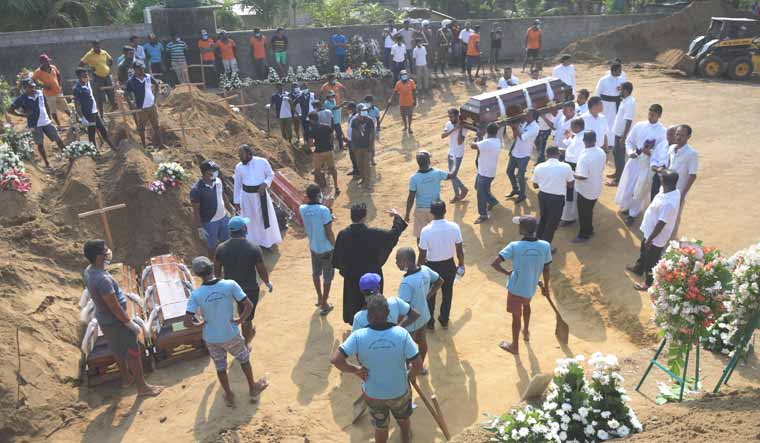 Sri Lanka, on Thursday evening, revised downwards the death toll of the Easter Sunday blasts from 359 to "about 253”. The revision in the death toll came from the Health Ministry, which said, "it was a calculation error”.

On Sunday during the Easter prayers, three churches and three luxury hotels were attacked by suicide bombers, pushing the island nation to inconsolable grief and anger.

Hundreds of Sri Lankans and foreign nationals were killed in the attacks. The Sri Lankan government, which maintained that the death toll was "rising since Sunday afternoon", all of a sudden, on Thursday reduced the number of deaths from 359 to 253. Sources say the reduction in numbers was only to reduce the anger and grief among people.

Meantime, the police have continued carrying out raids and have issued photographs of seven people wanted in connection with the attacks. Sources also say that there are two more vehicles going around in Colombo with explosives.

Sri Lanka’s Defence Secretary Hemasiri Fernando on Thursday resigned from his post, taking responsibility for the intelligence and security lapses in the Easter Sunday blasts that claimed over 250 lives. However, he will continue to be in office till the government names a replacement.

Fernando is the first top official in the Sri Lankan government to step down from office, after the blasts. On Tuesday, two days after the attacks, in an emotional speech, Sri Lankan President Maithirpala Sirisena said the government will soon reshuffle the top bureaucrats in the country and there will be a security overhaul in the country in the next 24 hours. However, it took two days for the government to ask Fernando step down from the high-profile post.

Both Prime Minister Ranil Wickremesinghe and President Sirisena said they were unaware of the intelligence information on the attacks. Sirisena said, “Why the police did not act on intelligence is the burning question. I want to state here that I wasn’t informed either. If I had been informed, I would have acted immediately.” On the other hand, Wickremesinghe blamed Sirisena, saying he was intentionally kept out of every security council meeting by Sirisena and his officers since October.

In the meantime, the security forces—army, navy and the air force—have deployed over 3,000 additional troops on the streets to keep vigil over any suspicious movement in the country. In addition, the authorities have banned drones. They have also suspended visa-free travel for tourists from 39 countries—including European nations, Australia and US—for six months, beginning from May 1, for security reasons.

The FBI is also on the ground investigating the attacks to ascertain whether they are linked to the Islamic State.