Sexual violence: Accountability framework must include everyone involved 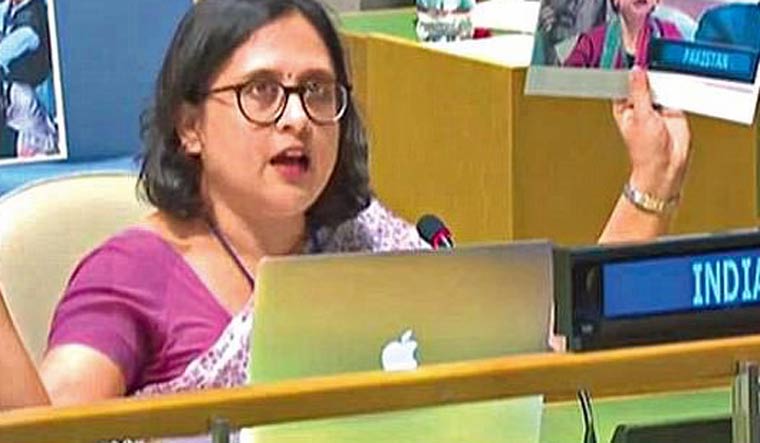 A robust framework for accountability against sexual violence in armed conflicts must include all actors, irrespective of their affiliations and motivations, India has said as it stressed the need to understand the nexus between terrorism, trafficking and sexual violence to address the scourge.

First Secretary in India's Permanent Mission to the UN Paulomi Tripathi said at the UN Security Council high-level open debate on Sexual Violence in Conflict that improving response to sexual violence in armed conflicts by the Security Council cannot be pursued in isolation and the normative work done outside the Council regarding equal rights and empowerment of women must continue to inform the discussions.

The UN Security Council called upon warring parties around the globe to implement concrete commitments to fight the heinous, barbaric and all-too-often silent phenomenon of sexual violence during conflict.

Adopting a resolution by a vote of 13 in favour to none against, with veto-wielding permanent members China and Russia abstaining, the Council reiterated its demand for the complete cessation of all acts of sexual violence by all parties to armed conflict.

Despite commendable advances both in policy and practice in combating sexual violence, the gap between what is recommended and the reality in the field remains. We need to better understand the dynamic complexities, that manifests as sexual violence in armed conflict, in order to prevent the atrocities, to end the culture of impunity and to rehabilitate and reintegrate the survivors, she said.

Tripathi stressed that a robust framework for accountability against sexual violence in armed conflicts must seek to include all actors, irrespective of their affiliations and motivations. Further, the conceptualisation of sexual violence primarily as a tactic of war' has become pervasive.

She, however, added that restricting one's understanding to the notion of instrumentality of sexual violence in armed conflicts runs the risk of rendering invisible the "other" victims of such atrocities.

These invisible victims could include boys and men, or those violated by civilians and humanitarian actors with other motivations. Framework of accountability and reparation must address their sufferings, she said.

She also emphasised that a fragmented conceptualisation of sexual violence in armed conflicts often leads to decoupling of the issue from its socio-cultural, political and economic context, adding that interventions based on limited considerations typically attempts to treat the symptoms rather than the underlying ailment.

The understanding of nexus between terrorism, trafficking and sexual violence must inform action in this regard. The Council must push for greater cooperation on countering terrorism and effective implementation of the sanctions regimes, she said, adding that the UN must also prioritise support to national governments to adopt stronger legal, administrative and justice systems for protecting the rights of the victims, prosecuting the perpetrators and addressing long-term consequences of abuses on the individual, family and community.

In order to address deep-rooted inequality and subordination in the society, greater participation of women in conflict resolution and post-conflict reconciliation processes needs to be promoted.

Tripathi also pointed out that mainstreaming of gender perspective in peace operations and increasing women's representation in peacekeeping are prerequisites for prevention and response.

In this regard, India welcomed the Uniformed Gender Parity Strategy to increase the number of women peacekeepers, and is ready to deploy a Female Engagement Team in the United Nations Organisation Stabilisation Mission in the Democratic Republic of the Congo (MONUSCO) and a women Formed Police Unit in the UN Mission in South Sudan this year.

Tripathi also made a reference to the situation in 1971, when appalling atrocities were perpetrated against women with impunity by the armed forces of a State in India's immediate neighbourhood in 1971, saying memories of the time "remains vivid" and the scars of these wounds are yet to heal.

The perpetrators of these crimes are now masquerading as champions of justice in order to cover their misdeeds, she said.

The Council reiterated its deep concern that despite its repeated condemnation of violence against women and children in situations of armed conflict, including sexual violence the phenomenon continues to occur, often with impunity, and in some situations has become systematic and widespread, or reached appalling levels of brutality.

Several experts, high-profile activists and survivors briefed the Council. Nobel Peace Prize Laureate Nadia Murad from Iraq recalled that ISIS enslaved thousands of Yazidi girls and women before the eyes of the world in a genocide that continues today.