National flags were lowered as the silence began at 8.30 am local time 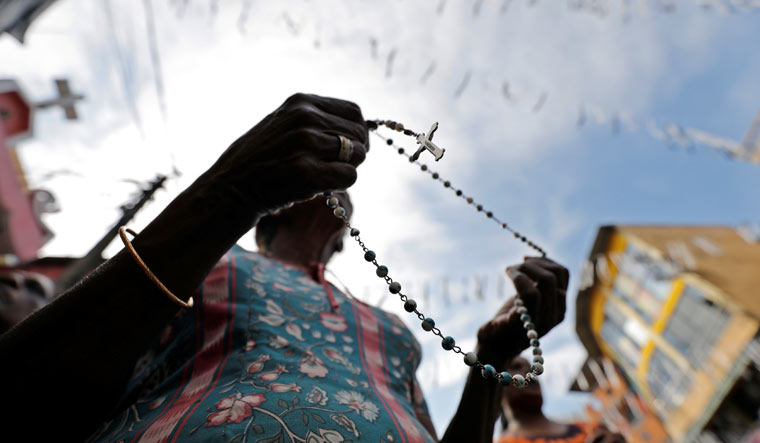 National flags were lowered and people bowed their heads as the silence began at 8.30 am local time, the time the first of the attacks occurred on Sunday.

“We have declared today a day of national mourning, we urge people to raise a white flag in honour of the victims,” said Kamal Padmasiri, secretary to the ministry of home affairs.

He said a 3-minute silence was observed nationwide and the national flag will be flown at half-mast.

Police spokesman Ruwan Gunasekera said the death toll in a series of devastating blasts that tore through churches and luxury hotels in Sri Lanka had risen to 310.

“The death toll has now gone up to 310”, Gunasekera said.

Seven suicide bombers believed to be members of an Islamist extremist group―the National Tawheed Jamath (NTJ)―carried out a series of blasts that ripped through three churches and luxury hotels on Sunday, killing over 300 people and wounding more than 500 others, including 8 Indians, in the country's worst terror attack.

A string of eight blasts were reported on Sunday, including at three churches in Negombo, Batticaloa and Colombo's Kochchikade district during Easter services. The Shangri-La, Kingsbury and Cinnamon Grand luxury hotels, all in the capital, were also targeted.

No group has claimed responsibility for the attacks, but police have arrested 24 people―mostly members of the NTJ―in connection with the blasts.

The funerals of most of the victims at the St Sebastian's Church in Katuwapitiya, Negombo will be held this afternoon.

The office of Cardinal Malcolm Ranjith said that he would be personally attending the funerals held in the predominant Catholic region in the western coastal district.

“There will be a mass funeral for 60 of the dead at the St Sebastian's Church,” a spokesman said.

Sri Lanks's Parliament will meet in a special session this afternoon.

Prime Minister Ranil Wickremesinghe and leader of the opposition Mahinda Rajapaksa will make statements on the attacks.

The curfew which was imposed at 8 pm last night was lifted at 4 am on Tuesday.

For the first time since the attack, the traffic returned to roads in Colombo where security had been heightened with the presence of troops.

The emergency regulations that would allow police and the troops sweeping powers to arrest and detain suspects came into force last night.

The suicide bombings struck three churches and three luxury hotels on Sunday in the island nation's deadliest violence since a devastating civil war ended in 2009.

The blasts shattered a decade of peace in the island nation since the end of the brutal civil war with the LTTE.

The civil war ended with the defeat of the Liberation Tigers of Tamil Eelam (LTTE), which ran a military campaign for a separate Tamil homeland in the northern and eastern provinces of the island nation for nearly 30 years.

The LTTE collapsed in 2009 after the Lankan army killed its supreme leader Velupillai Prabhakaran. The war is thought to have killed between 70,000 and 80,000 people.