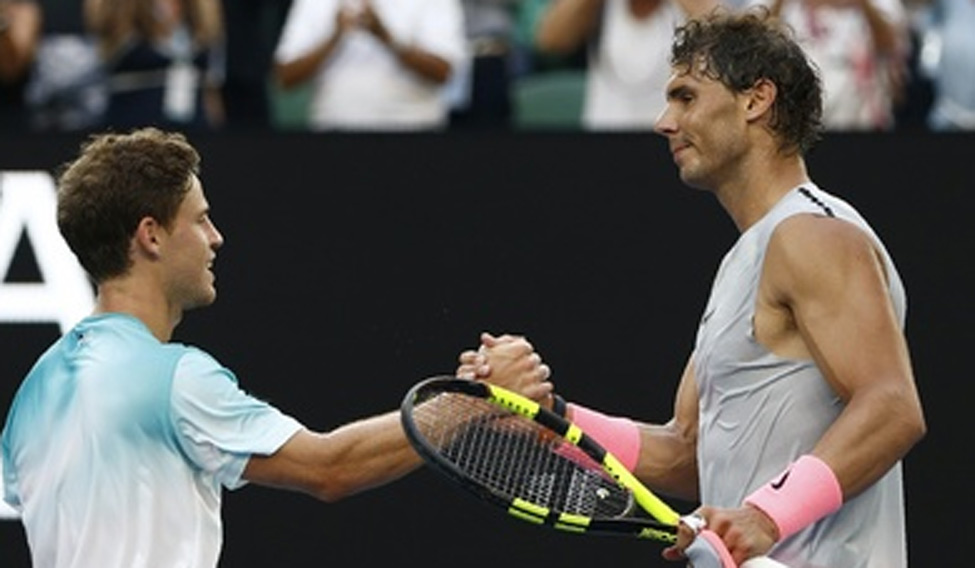 Spain's Rafael Nadal fought off tenacious Argentine Diego Schwartzman to win through to the quarterfinals of the Australian Open on Sunday, ensuring he remains world number one after the tournament ends.

It will be his 10th Australian Open quarterfinal appearance, second only to Roger Federer, and he will face Croatia's sixth seed Marin Cilic. Nadal leads 5-1 in their previous meetings.

It was the Spaniard's fourth win over the Argentine but his toughest after beating him in straight sets in the second round at the 2015 US Open.

By winning, Nadal ensured that he will remain No.1 when the new rankings are released the day after the Open ends.

"Of course, I feel little bit tired, but yeah good. I was able to keep fighting until the end," he said.

"It is the first big match I played in 2018. I started later than usual, so a match like this probably helps because you know that helps confidence in myself.”

"That's confidence knowing that I can resist almost four hours on court playing at a good intensity."

Nadal broke in the eighth game on the way to taking the opening set, but he encountered stiff resistance in the second set.

There was six service breaks as Nadal could not shake off the tigerish Argentine, who levelled the match by winning the tiebreaker when the top seed's forehand was long.

There was a magical moment when Schwartzman ran down a drop shot and won the point with an angled volley across the net to break back at 4-4.

Nadal took control in the third set with a break in the fourth game, but he had to fight off five break points before holding serve in a titanic 13-minute second game in the final set.

He broke in the third game of the fourth set, but had to make some monumental holds of service to keep Schwartzman at bay, winning on his third match point with a return winner.

Diminutive Schwartzman, a quarterfinalist at last year's US Open, was bidding to reach the last eight for the first time in Melbourne.

He endeared the crowd with the scampering around the court and his astonishingly powerful groundstrokes for one so small in stature.

Your form could not be submitted.
This browser settings will not support to add bookmarks programmatically. Please press Ctrl+D or change settings to bookmark this page.
Topics : #Grand slam | #Australian Open | #Rafael Nadal | #tennis