CWG: Strong start for India in badminton; heartbreak in cricket 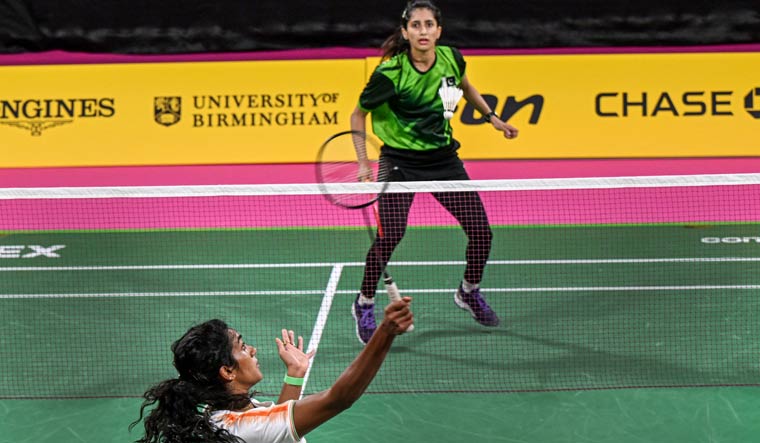 India started off its Commonwealth Games campaign in style thrashing Pakistan in badminton, but had to endure a heartbreak in women's cricket, losing to Australia after being in a dominating position.

India's fancied shuttlers didn't break a sweat on way to completing a 5-0 sweep in their mixed team campaign opener. The duo of B. Sumeeth Reddy and Machimanda Ponnappa started the proceedings with a comfortable 21-9 21-12 win over Muhammad Irfan Saeed Bhatti and Ghazala Siddique in their mixed doubles Group A clash at the National Exhibition Centre.

Kidambi Srikanth then got the better of Murad Ali 21-7 21-12 in the men's singles match.

Then, it was the turn of double Olympic medallist P.V. Sindhu to grab a dominant win over Mahoor Shahzad in women's singles. The champion Indian shuttler won 21-7 21-6.

In the fourth match, which was the men's doubles contest, Satwiksairaj Rankireddy and Chirag Shetty got the better of Murad Ali and Muhammad Irfan Saeed Bhatti.

Unlike in the first three matches, Pakistan tried to take the fight to the Indians but soon, the duo of Rankireddy and Chirag found their bearings and emerged 21-12 21-9 winners.

In the concluding women's double match, India's Treesa Jolly and Gayatri Gopichand crushed Mahoor Shahzad and Ghazala Siddique 21-4, 21-5 to complete the rout on a dominant note.

The Indian women's hockey team defeated a lowly Ghana 5-0. The Savita Punia-led team was, however, far from impressive in its first Pool A game.

Penalty corner conversion continued to haunt India as they made use of just one out of 10 chances.

Ace Indian boxer Shiva Thapa outclassed Pakistan's Suleman Baloch in the first round of the 63.5kg category bout. The former Asian champion was far superior than his taller and aggressive rival to emerge 5-0 winner in his light welter weight category.

India's men and women table tennis teams had easy starts to their respective campaigns with identical 3-0 victories over Barbados and South Africa.

In the women's event, the first on court was the doubles duo of Sreeja Akula and Reeth Tennison, who combined well to beat the South African pair of Lailaa Edwards and Danisha Patel 11-7 11-7 11-5 to hand India the lead.

Then, reigning Commonwealth Games champion Manika Batra, who became the first Indian table tennis player to win a gold in the women's singles in the last edition, lived up to her billing and thrashed Musfique Kalam 11-5 11-3 11-2 in the first singles match.

Akula then came back and scored a dominating 11-5 11-3 11-6 win over Patel in the second singles to seal the tie for India.

Srihari Nataraj clocked 54.68s to qualify for the semifinals of the men's 100m backstroke event. The 21-year-old from Bengaluru was the third fastest swimmer in his heat and fifth fastest overall. If he had clocked his personal best of 53.77s he would have topped the heats. The fastest swimmer in the field was South Africa's Pieter Coetze who clocked 53.91.

However, seasoned Sajan Prakash and debutant Kushagra Rawat failed to advance to the semifinal of their events respectively. Prakash finished eighth in the heats with a timing of 25.01 men's 50m butterfly event. The best 16 athletes progressed to the semis.

Kushagra too finished last in the men's 400m freestyle event as he stopped the clock at 3:57.45s.

India pacer Renuka Singh's dream spell did not prove to be good enough as Australia came back from the brink to pull off a three-wicket win in the group A opener.

The target of 155 should have been a straightforward chase but Renuka, playing only her seventh T20, broke the backbone of Australian batting with figures of four for 18 in four overs.

With Australia on the mat at 49 for 5, India should have completed the job but allowed Ashleigh Gardner (52 not out off 35 balls) to change the game in two game-changing stands of 51 and 47 with Grace Harris (37) and Alana King (18 not out) respectively.

Earlier. Shafali Verma (48 off 33) and skipper Harmanpreet Kaur's (52 off 34) stroked-filled innings entertained the Edgbaston crowd but the other batters disappointed.

The Indian men's team of Chandan Kumar Singh (skip) Navneet Singh (lead) and Mridul Borgohain (second) lost 6-23 to New Zealand in their first game. They then suffered 12-19 defeat at the hands of Scotland in the second game.

Indian cycling's Commonwealth Games campaign began on a disappointing note with all the three teams failing to make the finals.

The Indian men's sprint team of Ronaldo Laitonjam, Y Rojit Singh, David Beckham Elkatohchoongo could not make it to the medal round, finishing sixth in the qualification with a total time of 44.702 seconds at the Lee Valley VeloPark.

They were 2.480 seconds behind the first place finishers Australia.

The fastest two teams will race for gold while the third and fourth finishers in the qualifying round compete for bronze.

The women's sprint team also did not do better than the men's side as it ended at seventh in the qualifying round with a total time of 51.433. The Indian team, comprising Shushikala Agashe, Triyasha Paul and Mayuri Lute, was 3.592 second more than the New Zealand team, which clocked 47.841 seconds.

Then, the Indian men's 4000m pursuit team finished sixth and last in the qualification with a total time of 4:12.865 which was 23.044 second more than the leader New Zealand.