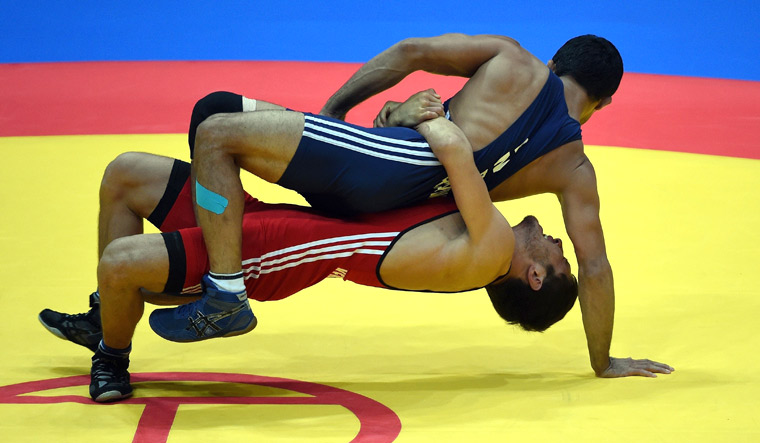 India's elite wrestlers and coaches are facing severe health and injury risks after being forced to train in a virtual 'cauldron' at the Sports Authority of India's Sonepat centre due to delayed renovation of the dedicated wrestling hall.

Close to 70 male wrestlers, including country's top free-style and greco-roman exponents, are sweating buckets at the multipurpose hall, which is not fit for training when the mercury is touching an unforgiving 45 degree celsius these days in and around NCR.

One of the coaches, supervising the national camp, told PTI that sometimes the temperature inside the multipurpose hall during the training is torturous 39 degrees.

"Ideally, we should train when the temperature is around 23-24 but we are just exposing our wrestlers to injuries by asking them to train in such hot conditions. This is not ideal when Commonwealth Games are approaching," the coach said.

"It feels like we are taking sauna bath. That's kind of heat that is generated," said one of the wrestlers.

The wrestlers used to train at Sushil Kumar and Yogeshwar Dutt Hall but since it is still under renovation, the wrestlers have been training at the multipurpose hall, whose 12.5 metre height makes the AC ineffective.

The national camp began early this year at SAI Centre and during the winters also, the interior temperature was not at all conducive for training.

"If outside it was 10 degree celsius, inside the hall, it would be 7 or 8 degrees. It became freezing cold since this hall is not fit for wrestling training."

SAI Executive Director Lalita Sharma informed that they have now placed some coolers inside the hall to help out the wrestlers.

"We have arranged six coolers today. We are trying to help the wrestlers. Hopefully the renovation will be complete in a month's time," said Lalita.

"The renovation work began before the Covid-19 struck but it had to be stopped due to the pandemic. The structure was already dismantled by then, so they are training in the hall which is used for badminton and volleyball training."

The wrestlers and coaches are also unhappy with the quality of the food being served at their mess.

"There is variety but the food lacks quality. We don't even get juice and coconut water on daily basis. At best, they serve us watermelon juice and that too in the evening. Is that what wrestlers need to take?," asked one wrestler.

"We actually need Mosambi (Sweet Lemon) and Pomegranate juice that helps in recovery after training."

It has been learnt that Bajrang Punia and many other wrestlers do not eat at the SAI mess and prefer eating home-made food.

"They do not even have enough utensils and cutlery in the mess. One coach carries his own steel glass because there are not enough glasses there. Sometimes the coaches drink milk from plates," said a wrestler, who did not wish to be named.

"It was better till a private contractor was working but ever since the new contractor has come, things have become worse. The mess is in complete mess."

"Earlier, we would get food even if we reach the mess late due to extended training session but it's not the case anymore. Sometimes you have to go without food because they stop serving food after stipulated time."

However, the SAI ED countered the claim by saying that they serve only what the nutritionist suggests.

"We don't serve what tastes well but what nutritionist suggests. The wrestler will take some time to adapt. We only try to help them in training in best possible manner."

The SAI centre though has added sophisticated equipments to the Sakshi Malik Hall where the athletes can have Vo2 tests done under the supervision of experts.

"That's a good thing that has happened. Some quality machines have been added. Bajrang had recently got his Vo2 test done to check oxygen level checked," said a wrestler.