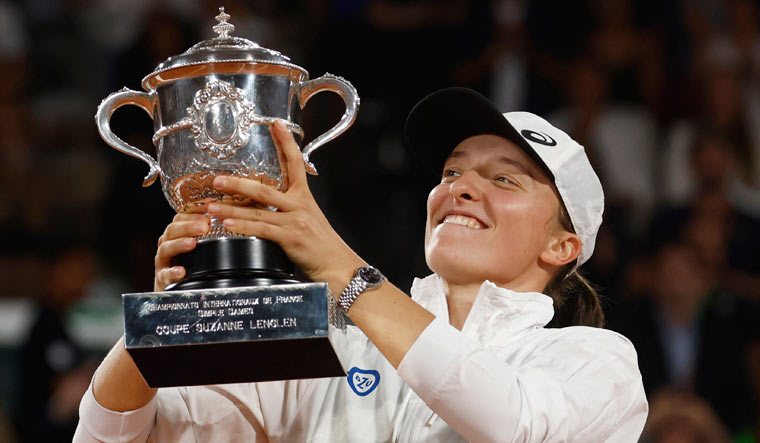 Iga Swiatek is so efficient, so smooth, with a racket in her hand, seemingly never flustered a bit and, for months now, never beaten.

The only time she looked even the slightest bit shaken on Saturday at Court Philippe Chatrier was after her 6-1 6-3 victory against Coco Gauff in the final was finished, pushing the No. 1-ranked Swiatek's winning streak to 35 matches and her French Open title count to two.

That's when the tears flowed, first during the Polish national anthem - Swiatek is the only player from that nation to win a Grand Slam singles title - and, again, during the trophy ceremony.

"I just told Coco, Don't cry,'" said Swiatek, who claimed the 2020 French Open while still a teen and ranked outside the top 50, "and what am I doing right now?"

She interrupted herself a few times during her victory speech, at one point admonishing, "Oh, my God. It seems like I still need some experience."

But Swiatek also gathered her thoughts well enough to offer support and wishes of hope for Ukraine, which Russia invaded in February.

"Stay strong, because the world is still there," Swiatek told Ukrainians, whose blue-and-yellow flag is represented by a ribbon of those colors she has been wearing on her white cap during matches.

Gauff, an American appearing in her first major final at 18, and just weeks removed from celebrating her high school graduation with cap-and-gown photos near the Eiffel Tower, never stood much of a chance - like most opponents against Swiatek lately.

Swiatek's unbeaten run stretches back to February and equals one by Venus Williams in 2000 as the longest this century.

"The past couple months have truly been amazing and you totally deserve it," said the 18th-seeded Gauff, now 0-3 against Swiatek, to her 21-year-old opponent, then added with a chuckle: "Hopefully we can play each other in more finals, and maybe I can get a win on you one of these days."

Having won her past six tournaments, improving to 42-3 this season, Swiatek has emerged as a dominant figure in tennis, with 23-time Grand Slam champion Serena Williams out of action for nearly a year and three-time major champ Ash Barty announcing in March she would retire at 25 and relinquish the No. 1 ranking.

That allowed Swiatek to move up to the top of the WTA, and she's shown she is a deserving resident there.

"Two years ago, winning this title was something amazing. Honestly, I wouldn't expect it, ever," Swiatek said. "But this time, I feel like I worked hard and did everything to get here, even though it was pretty tough. The pressure was big."

On the warmest day of the tournament, with the temperature at 82 degrees Fahrenheit (28 Celsius), just a few puffs of white in the blue sky at the outset turned into thick, foreboding gray clouds by the second set, accompanied by a thunderclap.

Gauff did not get off to the best of starts, perhaps reflecting early jitters that would be understandable coming from any player in a debut on this stage.

The player on the other side of the net certainly had a lot to do with the way things went over the final's 1 hour, 8 minutes.

When Gauff's work-in-progress forehand betrayed her again, it was 3-0 after just 15 minutes. Soon, it was 4-0 in Swiatek's favor.

Not in all cases, of course, but often, the spectators at Roland Garros tend to back an underdog or whichever player is trailing both of which applied to Gauff. So there was a surfeit of shouts of "Allez, Coco!" One person yelled, "Coco, you can do it!"

There were repeated cries of her chant-ready, two-syllable first name.

When Gauff got on the board by holding to 4-1, the applause and roar were suitable for the capture of a set, not simply one game.

"You guys supported me, even when I was down," Gauff told the fans afterward.

As things appeared to be getting away from her, Gauff slapped her thigh or covered her eyes, shook her head or looked up toward her parents in the stands.

What she never did was waver or concede anything.

Gauff began the second set by breaking Swiatek for the only time, and then holding to go up 2-0. Might this transform into a much closer contest? Might Gauff push Swiatek to a third set?

No. Swiatek quickly recalibrated and reasserted herself, breaking back for 2-all as Gauff's propensity for miscues returned. By the end, Gauff had more unforced errors, 23-16, and also fewer winners: 14 for her, 18 for Swiatek.

Gauff hadn't lost a set in the tournament and was averaging nearly six breaks per match entering Saturday, but she only earned one break point on this afternoon. Swiatek got 10, converting half.

Swiatek is not just winning, but winning easily, already amassing 16 sets taken by a 6-0 score in 2022 and it's only early June.

She does it with a mix of a topspin-laden heavy forehand a la someone she admires greatly, 13-time French Open champion Rafael Nadal, who will face Casper Ruud in the men's final on Sunday - and an all-court game, filled with variety and an appreciation of setting up moves ahead of time during a point. Much like a chess player, which she is.

Swiatek's got other attributes, too, such as strong footwork that allows her to play defence when required.

Also key to Swiatek's presence, and swiftly burgeoning aura, is her calmness on court. She has travelled on tour with a sports psychologist, who was in Swiatek's guest box on Saturday, and works on various elements of her professional and personal lives.

That includes an emphasis on maintaining focus and setting priorities, such as the determination that she is still too new at this whole business of attempting to win Grand Slam titles that she decided it was best not to attend the Champions League soccer final in Paris last weekend, something Nadal did do.

Maybe a couple of years down the road, Swiatek surmised, a night out might be a welcome distraction. For now, Swiatek said, she felt she needed to keep all of her attention on tennis.

Why mess with success?