Ruud, 23, had never been past the fourth round at any major tournament 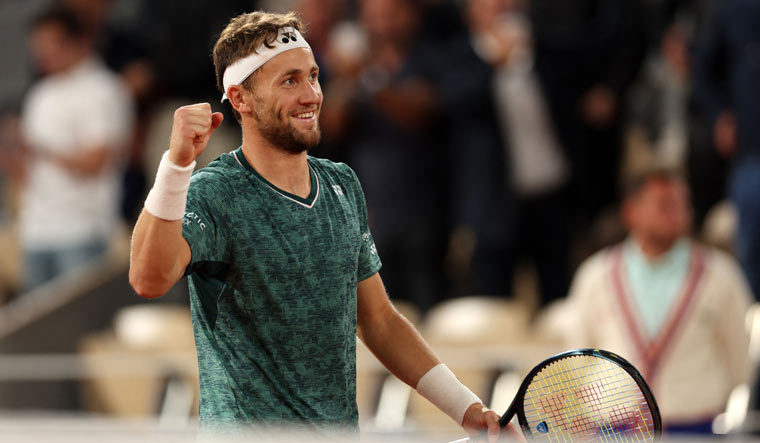 The eighth-seeded Ruud is 23 and never had been past the fourth round at any major tournament until now.

His father, Christian, was a professional tennis player from 1991 to 2001.

Ruud has shown that he can play well on clay, with tour highs of seven titles and 66 match wins on the surface since the start of 2020.

He now faces the toughest test there ever has been on clay, going up against 13-time French Open champion Rafael Nadal in the final on Sunday. Ruud has trained at Nadal's tennis academy in Spain and refers to the 36-year-old Spaniard as his idol.

Ruud returned Cilic's big serve well enough to break him five times and even hit more aces, 16-10. Cilic had 33 aces in the quarterfinals on Wednesday.

The semifinal was interrupted for more than 10 minutes in the third set by a climate activist, wearing a T-shirt with the message 'We have 1028 days'. She attached herself to the net with metal wires and glue and knelt on the court.

Play was delayed for 13 minutes during a game with Ruud serving in the third set while leading 3-6, 6-4, 4-1, 15-all at Court Philippe Chatrier.

The young woman, of French nationality, entered the grounds with a valid ticket early in the day, the French Tennis Federation said in a statement issued after the match.

The protester remained on the court for several minutes before four security guards approached her, detached her from the net and eventually carried her away.

“The security team needed to formally identify the objects she used to get onto the court before they could remove her," the federation said, adding that she was handed over to the police.

Tournament director Amelie Mauresmo looked on from near the entrance to the court and both players were escorted to the locker room during the episode.

“I didn't really know how to react to it, and ... I didn't know if she was holding anything," Ruud said.

"I didn't get to see too much. So, it was a little bit (of a) tricky and difficult situation. Never happened to me before.”

Eventually, Ruud and Cilic returned and were given three minutes to warmup before resuming their semifinal.

Cilic said the disruption did not affect his level of play.

There have been other episodes involving people interrupting matches at Court Philippe Chatrier over the years.

During the 2013 men's final, a topless man carrying a fiery flare jumped onto the court. In the 2009 final, a man went up to Roger Federer and tried to put a hat on his head. In the 2003 final, a male streaker hurdled the net.