Keegan Petersen's knocks of 72 and 82 saw the Proteas through 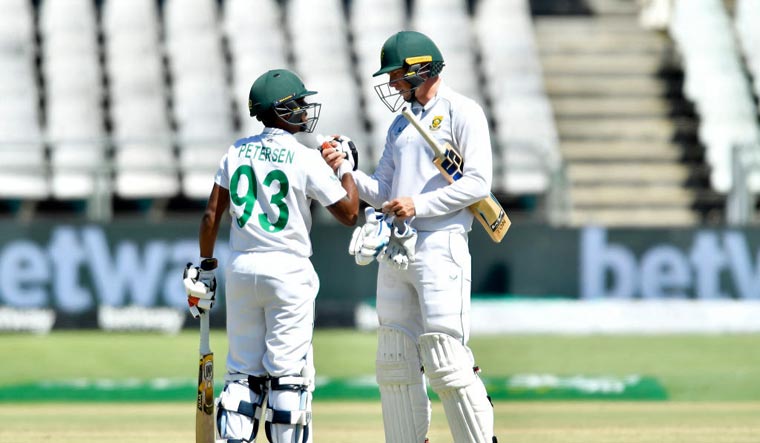 South Africa's Keegan Petersen and Rassie van der Dussen during their partnership against India on the fourth day of the third Test | Twitter: ICC

South Africa beat India by seven wickets to win the third Test at Cape Town, sealing a 2-1 series win. Keegan Petersen's 82 in the second innings powered the Proteas to the target of 212 on day four.

After winning the first Test, India lost the remaining two Tests to concede the series to a depleted South African side.

South Africa entered day four of the Test in a strong position, and the crucial partnership that Petersen had with Rassie van der Dussen (41 not out) took the game away from the visiting side. Temba Bavuma played a cameo role too with his unbeaten 32.

The Indian batting line-up came a cropper in both innings with only Virat Kohli's 79 in the first innings and Rishabh Pant's brilliant 100 in the second the only bright spots.

Kagiso Rabada and Marco Jansen finish the game with seven wickets a piece as the duo and Lungi Ngidi ran riot to restrict the Indians to modest totals of 223 and 198.

South Africa had a low-scoring first innings too as Jasprit Bumrah's five-wicket haul ensured the hosts did not cross India's total.

But Petersen's controlled knocks of 72 and 82 eventually won the match for South Africa.

It was especially sweet for the hosts who lost premier pacer Anrich Nortje to injury before the series and were then hit by Quinton de Kock's sudden mid-series retirement.

The Indian team, meanwhile, lost it in their mind after the contentious DRS review of Elgar that went wrong on Thursday and their focus on using stump microphone more to take digs at broadcaster Supersport instead of than focussing on getting Petersen out spelt their doom.

With this series defeat, India's record of never having won a Test series in the Rainbow Nation for three decades, remained intact.

The ODI series between the two begins on January 19.