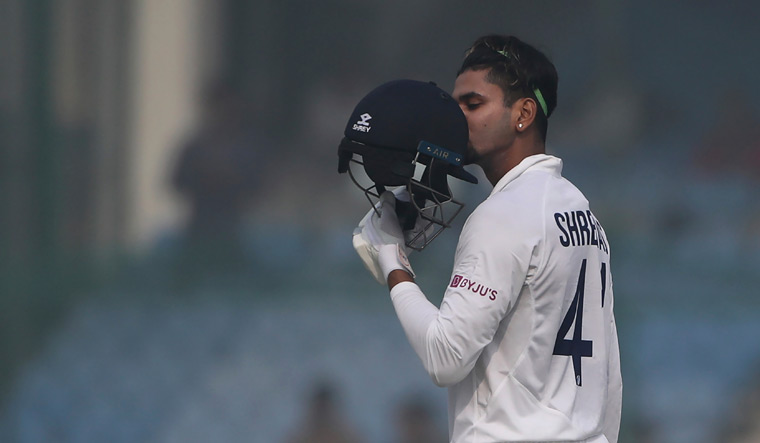 Shreyas Iyer has scored a century on his Test debut, becoming the 10th Indian to do so. Iyer was drafted into the squad for the first Test against New Zealand in Kanpur and made it to an elite list of players with his century.

He fell shortly later to Tim Southee, ending a brilliant innings on 105 in the first session of day two.

Iyer had led the fight back on day one after three quick wickets by the tall Kyle Jamieson. He walked in with India reeling at 106 for 3, and after the Indian top order departed, he built a 100-run partnership with Ravindra Jadeja to take India to 284 for 5 at stumps on day one.

The latest addition into the Centuries on debut for India club - @ShreyasIyer15 👌#TeamIndia #INDvNZ @Paytm pic.twitter.com/r9yl1kFjQa

On a pitch that had variable bounce and didn't offer enough pace off it, Iyer put his best foot forward while facing 136 balls, hitting seven boundaries and two sixes on his very first day in office in the longest format.

But at 144 for 4, Iyer took charge with senior all-rounder Ravindra Jadeja (50 batting, 100 balls) for company as they resurrected the innings, at the same time batting with a lot of intent to keep the scoreboard ticking.

Jadeja and Iyer would lose their wickets in the fist ten overs of day two, both to Southee. Though both teams have opted to go with three spinners, Jamieson and Southee have dominated the first innings, causing much trouble for the Indian batting lineup.