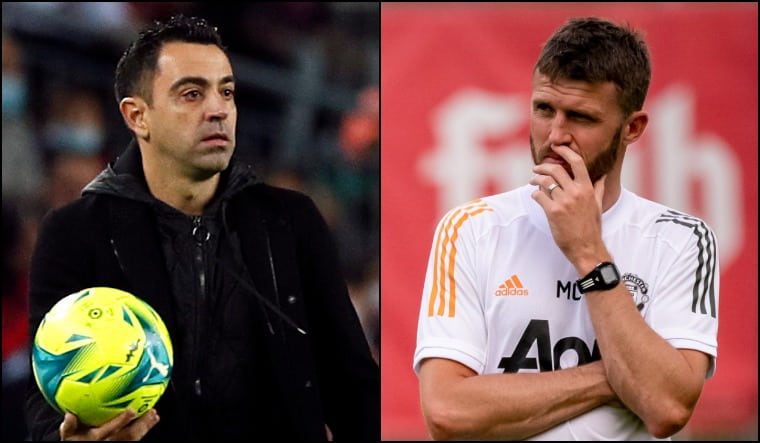 Major talking points in the Champions League heading into the fifth round of group games:

One of English football's most underappreciated midfielders in recent years, Michael Carrick was known for his calmness, quiet authority and vision on the field. He'll need all of those attributes now he has been thrust into one of the world's biggest coaching jobs pretty much from out of nowhere.

Carrick, who only started his coaching career in 2018 and has never held a senior position, was named as United's caretaker manager following the firing of Ole Gunnar Solskjaer on Sunday.

In place until United finds another coach for the rest of the season, Carrick starts his new role with a crucial match away to Villarreal on Tuesday as the teams look to seal qualification to the knockout stage. They are both on seven points in Group F, two points clear of Atalanta with two games left.

Carrick will need to pick up a beleaguered United team that lost 4-1 at Watford in the Premier League on Saturday, the latest in a string of dreadful results that ultimately cost Solskjaer his job.

Barcelona enters its crucial home match in Group E against Benfica on Tuesday boosted by the arrival of former great Xavi Hernandez as its new coach. It will be his second match in charge after a league win in the Barcelona derby against Espanyol on Saturday, a result that ended a four-game winless streak in the league.

The Catalan club started its Champions League campaign with consecutive 3-0 losses to Bayern Munich and Benfica, but a win against the Portuguese side will allow it to clinch a spot in the knockout stage and avoid its first elimination in the group stage in nearly two decades.

Lukaku back against Juve

Chelsea striker Romelu Lukaku, who has been out of action for month, could start for Chelsea as the London side takes on Italian giants Juventus.

The defending champions lost to Juve in the first fixture, and trail the team by three points in Group H. A win at their stadium will take them level on points with just two rounds of fixtures to go.

For Juventus, who are struggling for goals since the departure of Cristiano Ronaldo in the summer, the side will be hoping to breathe life into its season as they lie eighth in the Serie A table.

The side is coming off a win over table-toppers Napoli, which will boost their morale, but they will have to fight for a win over Chelsea without their leading goal scorer Paulo Dybala, who is injured.

A win for Paris Saint-Germain in its heavyweight meeting at Manchester City on Wednesday would secure the French team a place in the last 16. Its away form has been concerning, though.

In contrast to winning every game at its Parc des Princes home this season, PSG has drawn away to Club Brugge and Leipzig in the Champions League and lost at Rennes in the French league.

With Lionel Messi fit, PSG will always have a great chance of victory and the Argentina star will be boosted by scoring his first goal in Ligue 1 in the win over Nantes on Saturday.

Messi already has three goals in the Champions League—including one in the home win over City. City is on nine points, one more than PSG, in Group A. Third-placed Brugge is a further four points behind.

Bayern Munich are already through to the next round with a perfect four wins from four games. So it is likely coach Julian Nagelsmann will opt to give some key players a rest at Dynamo Kyiv on Tuesday for their penultimate game in Group E.

Kyiv, bottom of the group with one point, needs a win and favor from Benfica against Barcelona to stay in contention.

But Bayern's buildup has been overshadowed by COVID protocol issues as five reportedly unvaccinated players—Joshua Kimmich, Serge Gnabry, Jamal Musiala, Eric-Maxim Choupo-Moting and Michael Cuisance—are all in quarantine after coming into contact with someone who has COVID-19.

Niklas Sule and Josip Staniic are also in isolation after testing positive for the disease.

At the Wanda Metropolitano in Madrid, Atletico take on AC Milan in a crucial game for both sides. Diego Simeone's men have only four points from their four UCL games so far while Milan are bottom of Group B with just one point—one draw and three losses.

Both sides have lost to Liverpool, who face second-placed Porto.

Atletico, despite winning the Spanish league last year, are on a run of bad games in the continental competition—they have won only one of their last six matches—and a win over Milan could prevent them from dropping into the second-tier Europa League.

Milan are coming off a seven-goal thriller against Fiorentina that ended in a loss for the Rossoneri.