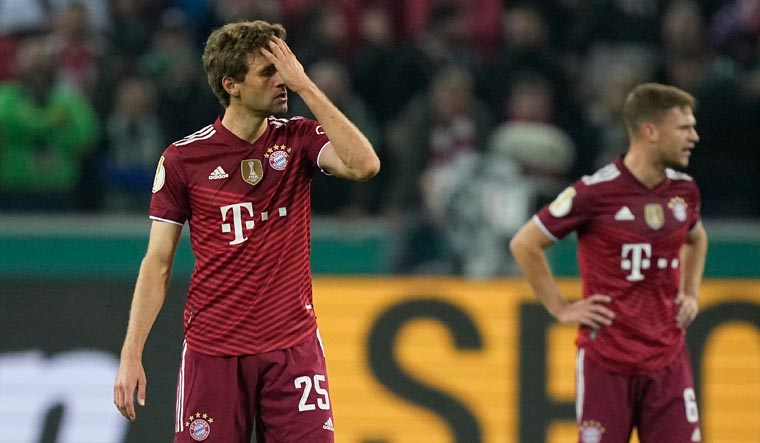 Bayern Munich usually deals out the thrashings in Germany, not the other way around.

The Bavarian powerhouse got a taste of its own medicine on Wednesday when Borussia Monchengladbach knocked Bayern out of the German Cup with a fully deserved 5-0 victory in front of its ecstatic fans.

It was Bayern's biggest-ever defeat in the competition and its heaviest loss in 43 years, since a 7-1 Bundesliga defeat at Fortuna Dsseldorf on December 9, 1978.

Bayern conceded five goals in the German Cup for the first time since the 2012 final, when Borussia Dortmund wrapped up a domestic league and cup double with a 5-2 win. Bayern responded by winning the league, cup and Champions League treble the following year and every league title since.

Gladbach raced into an early three-goal lead with Kouadio Kon opening the scoring in the second minute, Ramy Bensebaini adding another goal in the 15th and then converting a penalty in the 21st.

It could have been more with the home team also missing two good chances in between.

It was the 35th minute before Bayern managed a shot at goal, with Serge Gnabry testing Yann Sommer in the Gladbach goal. Leon Goretzka forced a good save from Sommer after the break, but Bayern's revival was brief.

Breel Embolo made it 4-0 in the 51st and grabbed his second goal six minutes later with Manuel Neuer preventing worse as he saved from Dennis Zakaria.

The home fans sang "Oh, wie ist das schon! (Oh, how wonderful this is!)" and can now look forward with optimism to the draw on Sunday for the third round.

Bayern was again without coach Julian Nagelsmann on the sideline due to his coronavirus infection, but he was able to communicate with his assistant, Dino Toppmller, who filled in.

Bayern started with both Lucas Hernandez and Joshua Kimmich in the lineup. The former found out earlier Tuesday that he would not face prison for violating a restraining order as he won his appeal in Madrid, and Kimmich made his first appearance since causing a furore over the weekend by voicing his concerns about getting a vaccine against the coronavirus.

Gladbach was one of only two teams to take points off Bayern in the league this season. The teams drew 1-1 in the opening game.

Second-division club Karlsruher SC knocked Bayer Leverkusen out with a hard-fought 2-1 win. It's been a bad 10 days for Leverkusen, which started with a 5-1 rout at home to Bayern. The team hasn't won in three games since.

Augsburg defeated Bochum 5-4 on penalties after their game finished 2-2 with extra time.

Hansa Rostock completed the second round with a 4-2 penalty shootout win at Jahn Regensburg after their game finished 3-3 with extra time. Rostock's Pascal Breier scored in injury time of extra time to send it to the shootout, where he also scored the decisive penalty.