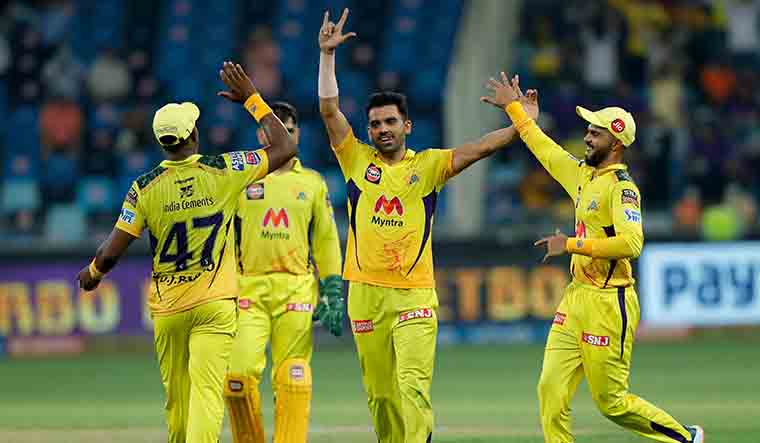 Chennai Super Kings produced a clinical performance with the bat and the ball to outwit Kolkata Knight Riders by 27 runs in the Indian Premier League 2021 final in Dubai. It was the fourth IPL title for the M.S. Dhoni-led side, having won it in 2010, 2011 and 2018.

A strong start followed by a familiar middle-order collapse put out all hopes for KKR. Though a late 39-run partnership off 21 balls between Shivam Mavi (20) and Lockie Ferguson (18*) added some drama, in the end, the 193-run target proved to be a tall one for them.

The chase began on the right note, with KKR openers Venkatesh Iyer (50) and Shubman Gill (51) putting on 91 runs for the first wicket in just 10.4 overs.

Both the openers got reprieves – Iyer was dropped by Dhoni on 0, while Gill’s dismissal was disallowed as the ball hit the spidey cam cable before the catch was completed, and so, it was declared a dead ball.

But Shardul Thakur (3/38) produced an all-important double-wicket over, first dismissing Iyer and then accounting for Nitish Rana, who fell for a golden duck.

With qualifier 2 hero Rahul Tripathi nursing an injured calf, Sunil Narine was promoted up the order in an attempt to score some quick runs. But it was not to be as the West Indian fell for just 2 runs to Josh Hazlewood.

Earlier, Faf du Plessis saved his best for the last with a blazing 86 off 59 balls as CSK posted a formidable 192 for 3. Ruturaj Gaikwad (32 off 27 balls), Robin Uthappa (31 off 15 balls) and Moeen Ali (37 not out off 20 balls) too chipped in with valuable contributions.

The former Proteas skipper got a reprieve in third over when Karthik bungled an easy stumping chance and then made full use by smashing seven fours and three sixes and also finished as second highest run-getter behind Ruturaj Gaikwad (635).

An opening stand of 61 in eight overs with 'flavour of the season' Gaikwad (32 off 27 balls) set the tone and then Robin Uthappa, who had decided to roll back years with 31 off only 15 balls that included his signature pick-up sixes over the deep mid-wicket region.

The 63 runs added in only 5.2 overs did derail KKR's bowling with only Sunil Narine (2/26 in 4 overs) getting his length and variations in pace right.

If that wasn't enough, another veteran Ali joined the party as suddenly du Plessis played the second fiddle letting the England international go hammer and tongs at the KKR bowling. They added 68 in 6.3 overs.