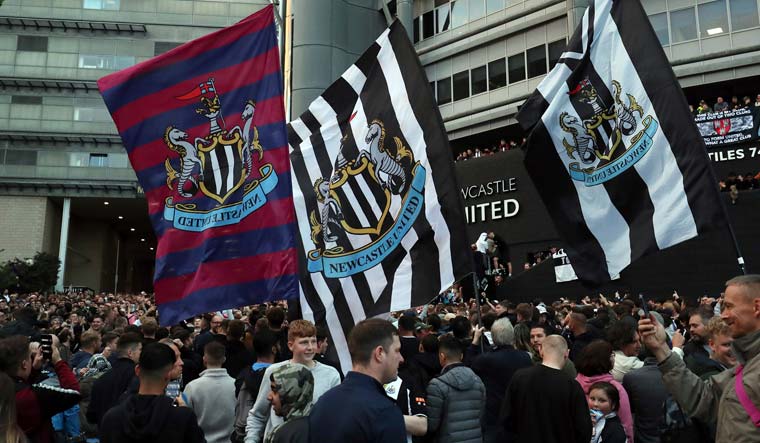 In one of the biggest takeovers in football history, English Premier League Newcastle United has been bought by a Saudi Arabia-backed consortium, ending the 18-month long saga over the purchase.

The deal is said to be worth £305 million, ending British owner Mike Ashley's 14-year spell as the owner of the club.

The Premier League had blocked the takeover last year after other clubs expressed concern that the state-backed Public Investment Fund that was part of the consortium would make the club essentially run by a country.

The PIF, which will provide 80 per cent funds for the deal, has now given the Premier League “legally binding assurances” that the country will not control the club, and that the PIF is seen separate from the state.

Tickets for our first game under new ownership against Tottenham Hotspur on Sunday, 17 October are now sold out.

Thank you for your support! ⚫️⚪️

The PIF, Saudi's sovereign wealth fund, is said to have assets worth £250 billion, which will make Newcastle the richest football club in the world.

Crown Prince of Saudi Arabia Mohammed bin Salman is the chairman of the PIF.

The other investors in the consortium are PCP Capital, owned by British financier Amanda Staveley, and the Reuben Brothers, a British property firm.

When the original bid to buy the club was made last year, the Premier League had also rejected it because Saudi Arabia had been accused of being a major supporter of online piracy of the league's TV broadcasts.

BeoutQ, a major online piracy network, was thought to be run by the Saudis, but the service has stopped operating since then.

The deep pockets of Newcastle's new investors mean that the traditional, fairly popular English club has the potential to become the biggest in the world.

Newcastle was founded in 1892 and was a force in the early 1900s. The club has won four league titles and was a major rival of Manchester United in the 1990s before a decline that saw them get relegated from the Premier League twice.

The club currently languishes in the relegation zone of the ongoing Premier League season but new signings and a new manager by January are sure to lift them up.

The transformation of the club could begin with big signings midway through the season, albeit within UEFA's Financial Fair Play regulations.

Despite Newcastle fans celebrate the dawn of what could be a new title-challenging era, the deal is also considered to be controversial because of Saudi's human rights reputation.

“Ever since this deal was first talked about, we said it represented a clear attempt by the Saudi authorities to sports wash their appalling human rights record with the glamour of top-flight football,” said Amnesty's UK chief executive, Sacha Deshmukh.

“Saudi ownership of St James' Park was always as much about image management for Crown Prince Mohammed bin Salman and his government as it was about football,” he said.

Newcastle United's next match is against Tottenham in the Premier League on October 17.