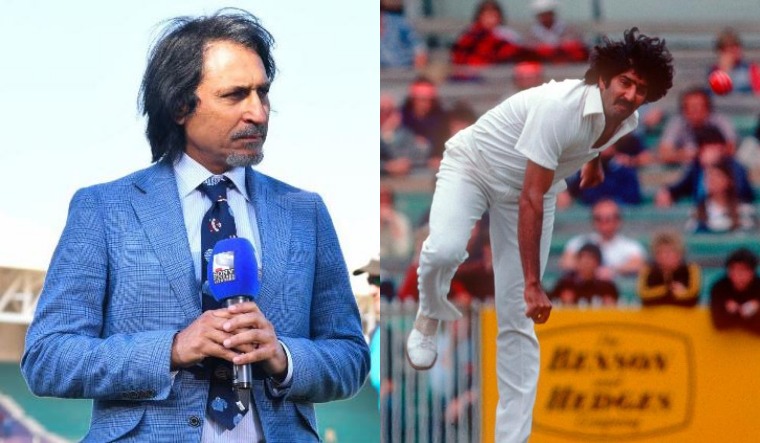 Former Pakistan fast bowler Sarfraz Nawaz was as well known for his hostile approach on the pitch and off it as he was for his partnership with Imran Khan as a fast-bowling pair in the 1980s.

Imran, now prime minister of Pakistan, had, reportedly, pushed for the elevation of former Pakistan opener Ramiz Raja to be the new chief of the Pakistan Cricket Board.

The formal election of the next chairman of the PCB will be held on September 13, with Raja all but certain to win.

Geo News reported on Tuesday that Sarfraz spoke about the elevation of Raja at a press conference in London. In a video clip shared on Twitter by Geo News reporter Murtaza Ali Shah, Sarfraz Nawaz can be heard saying he had no personal enmity towards Raja.

Sarfraz alleged Raja had been "pro India" and "anti-Pakistan". Sarfraz claimed Raja had supported India's role in the 'big three' of the ICC. The big three is the name given to the informal grouping of the cricket boards of India, England and Australia, which is considered the most influential lobby in the ICC. The big three has been accused of influencing scheduling of series and sponsorship deals to suit the three constituent cricket boards.

Sarfraz claimed Raja had "accepted" India's supremacy in world cricket. He said he would not accept Raja as the PCB chief. Sarfraz called on the people of Pakistan, media and even generals of the Pakistan Army to oppose the elevation of Raja. Sarfraz also referred to the memory of "martyred" Pakistani soldiers.

Sarfraz Nawaz said he was the captain of the domestic side in which Ramiz Raja made his first-class debut.

Addressing Imran, Sarfraz said in the letter, "If the news about your [Imran's] approval for appointment of Ramiz Raja as next chairman PCB is true, who blatantly and shamelessly advised Pakistan to become shameless by accepting the Indian supremacy and domination in the ICC [vehemently opposed by many renowned Pakistanis] and so much so that he [Ramiz] said that we should leave aside Pakistan in surrendering before the Indian hegemonist plan to rule the cricketing world through monopoly in the ICC...," according to media reports.

Sarfraz argued that "highly respectable legend Majid Khan who in the past had excellent relations with all ICC board members, or Zaheer Abbas [ex-ICC president] may be appointed the next chairman of the PCB instead of Ramiz since his appointment will be against the national sentiments and also severely hurting the patriotic feelings of the entire nation".