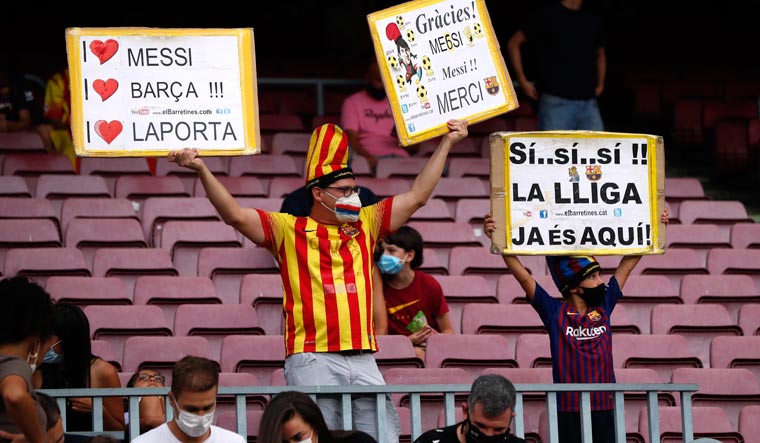 Barcelona's president presented a grim picture of the club's financial situation on Monday, saying its debt had risen to 1.35 billion euros ($1.6 billion).

Joan Laporta blamed the previous administration of Josep Bartomeu for the club's dramatic situation that ultimately led to Lionel Messi's departure. Laporta accused Bartomeu of countless lies and said he and his board of directors must be held accountable.

"Our salaries represent 103% of the club's total income. That's 20% to 25% more than our competitors, Laporta said in a news conference. We have found ourselves in a difficult situation to renegotiate the players' contracts."

The club lost star player Messi to Paris Saint-Germain this month because it could not give him a new contract that would fit within the Spanish league's strict financial fair-play regulations.

Laporta was among those targeted by some fans in the team's Spanish league opener on Sunday, when it defeated Real Sociedad 4-2. There were banners outside the Camp Nou criticising Laporta and accusing him of not doing enough to keep Messi.

A few also criticised Bartomeu, who recently published a letter in which he denied any wrongdoing during his administration. Bartomeu resigned last year amid the financial struggles and his fallout with Messi.

Gerard Pique said Sunday he had to take a salary reduction so the club could register some of its new players ahead of the opener against Sociedad, and that other veteran players such as Sergio Busquets, Jordi Alba and Sergi Roberto were expected to do the same.

Laporta said the club intends to reduce salaries by about 200 million euros ($235 million), and the focus for now will be on promoting youth players. Some of the players signed in the offseason came as free agents, including Memphis Depay, Eric Garcia and Sergio Aguero.

Laporta said that despite the complicated situation that the club is in, he thinks that in a couple of years it will all be resolved.

"We are not scared at all. We are highly motivated," he said. "It's a big challenge but we are capable of overcoming it."