MMA: Is this the end of the road for Conor McGregor, with his UFC 264 defeat to Poirier?

What next in McGregor's storied career? 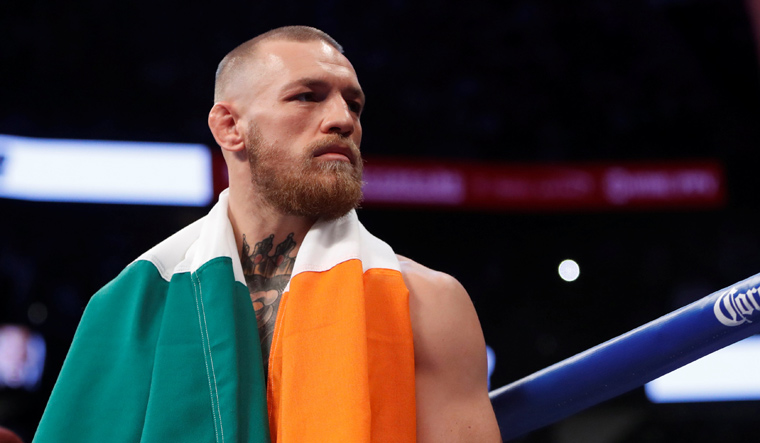 On Thursday, two days before his Ultimate Fighting Championship (UFC) trilogy fight with Dustin 'The Diamond' Poirier—possibly one of the most important matches of his career—Conor 'The Notorious' McGregor was at his incendiary best. “I am going to go through his head, put holes in him and take it off his shoulders. That is the goal here, he is done. This is it for him. This is the end of the road,” McGregor bellowed. “So, it is on now. Saturday night, he is getting walked around that Octagon like a dog and put to sleep.”

The entire press conference was a roller-coaster ride. While Poirier kept his composure throughout, McGregor followed up with the choicest of abuses, mixing in insulting chants on Poirier and his wife Jolie. He had earlier outrageously claimed that Jolie had messaged him on Instagram, tweeting an unsavoury cuss word as to what she wanted with him, and taunting Poirier to “think about it in the sauna”.

Later in the event, he threatened to smash the nose of a journalist who questioned why the fighter only had one registered victory since Barack Obama became US president. “Shut your mouth or I’ll go down [there] and smash your nose in,” McGregor said, reported IrishMirror. “I will smash your nose in you little rat, you little rat. Someone smack him. It is one more fight I won than your little sissy ass. You little fanny pad."

This was quintessential McGregor. The unpredictable force of nature, the most marketable of all UFC fighters, right down to the Dublin-twanged 't'. Maybe, just maybe, after a lengthy stint off the ring, and a couple of lacklustre performances, he was back. Back to his best.

This was what McGregor lived for. Or, so everybody thought.

The fight was anticlimactic to the nth degree. Poirier was adjudged the winner of the bout (and thus the winner of the trilogy 2-1) after McGregor broke his legs in a freak accident in the dying embers of the first round. The referee Herb Dean awarded the match to Poirier as TKO (doctor’s stoppage).

Not that the sparse few minutes of the first round weren’t illuminating in itself. There were sporadic signs of McGregor finding his way back to his explosive best, landing a lot of outside kicks to Poirier’s legs and pushing him back with wide strokes (very reminiscent of his comeback second bout with Nate Diaz). Twice McGregor had Poirier locked in a guillotine; twice Poirier was technical enough to wriggle out.

On the balance of things though, Poirier maintained complete control throughout, really bagging McGregor on the ground in the final half of the round, which ended with both parties missing successive strikes and McGregor landing on his leg and snapping it clean.

What are the implications for McGregor?

There was no title on the line at this fight. But, for McGregor, there were massive implications. Since the 2016 win over Eddie Alvarez to win the lightweight title (which was McGregor at his best), the abrasive Irishman had only won once—in January 2020, when he displayed excellent clinch work in the form of devastating shoulder strikes to dislodge Donald 'Cowboy' Cerrone's nose and orbital bone. The TKO took place merely 40 seconds into the first round. In 2018, he lost the lightweight title to Khabib Nurmagomedov, and lost to Poirier (whom he had beaten in 2014) in 2021. The winner of the trilogy fight would face lightweight champion Charles Oliveira (who beat Michael Chandler to win the title, which was vacated by Nurmagomedov with a career record of 29-0-0). If McGregor won against Poirier, the way to a title (and redemption) was clear. If he failed, he would be pushed back in the queue so hard and so fast, there could realistically be no coming back for him. It was all or nothing.

Now, the road ahead looks even darker for McGregor. Compounded by what looks at first sight to be a horrific injury. And the chant of naysayers getting louder, calling for his retirement at the age of 32.

Conor at his best and worst

When McGregor initially burst on to the scene, he was nothing short of an absolute phenom. With an unconventional sideways southpaw stance (that he alternated with a traditional, heavier boxer’s stance), and a deadly left hand that he wielded like Thor's hammer, he hunted down his opponents. His was a game of smoke and mirrors, pushing opponents to the fences and laying claim to the centre of the Octagon like it was his own personal fiefdom. The zenith of his career came in the defeat of Alvarez in 2016, when he became the UFC's first ever two-division champion.

He cemented his legacy as one of the best strikers in UFC history, and most certainly one of the game's best ever counter-punchers.

There were questions about a less-than-adequate gas tank, which meant he slowed down relatively quicker compared to his competitors. But, not many could push him to all five rounds, such was the level of his physical gifts.

In an episode of the Joe Rogan Experience, MMA coach Firas Wahabi broke down his game thus: “He has got that left hand, it is the touch of death. That touch of death comes at a cost. [McGregor] look at his stats. It is all round one knockout, round two knockouts, using his fast-twitch, high-leverage left hand. If you have a fast-twitch muscle fibre, you can hold less oxygen, but it can twitch faster. So, if you are a slow-twitch muscle fibre guy, you can metabolise more oxygen, but you can’t twitch as fast. So, there is a give and take.”

What really set him apart was his mastery over the mental side of the game—the best since Muhammad Ali. He knew exactly what buttons to press and when. Press conferences between McGregor and his opponent were rarely easy watches. He would pull, push, prod and probe at the oldest and the most prickliest of wounds, and emotionally rattle even the most stone-faced opponents. Urijah Faber and Cody Garbrandt at The Ultimate Fighter were some of the high-profile casualties. McGregor was box office. Pure entertainment rolled into the husk of a dangerous killer.

But, his trash talks had deeper intentions, sometimes winning the fight before even stepping foot in the Octagon. Take his fight with Jose Aldo for the featherweight title in 2015. The Brazilian was no slouch. He was one of the best in the sport, defending his title for well over five years. Until McGregor rolled in. He teased, insulted, swore at, and tortured his opponent to such an extent during the fight promotional events that Aldo's anguish was visible even during press conferences. The result: Aldo entered the Octagon in a state of mind that he should never have been in, and McGregor knocked him out in 13 seconds flat.

Against Nurmagomedov, trash talks took a really dark turn. McGregor attacked a bus of fighters that included Khabib, insulted his religion of Islam, tweeted that his wife (who wore a hijab) looked “like a towel” and escalated the feud to such a level that UFC president Dana White himself had to step in. The pent-up emotions were such that, after Nurmagomedov tapped out McGregor inside the Octagon, complete mayhem erupted in the stands— the two fighters' camps broke out in full brawl.

In the second bout with Poirier in 2021, however, McGregor looked a different man. He was relaxed, almost respectful, in pre-fight press conferences—leading analysts to muse whether he was a changed man post-Nurmagomedov—and his performance in the Octagon reflected the same. Negatively. If McGregor looked in complete dominance and at the peak of his powers in the 2014 bout, in the second, he looked ill-prepared and with no discernible gameplan. Poirier, on the other hand, knew what he had to do. The latter rained down devastating calf kicks on McGregor, immobilising his lead leg, and scoring a second-round knockout. There were allegations that the Irish striker was distracted, with eyes more on a boxing bout with legendary Filipino pugilist Manny Pacquiao. The latter failed to materialise.

There was already a lot of clamour for a McGregor retirement announcement. As Mirror reported, American Kickboxing Academy head coach Javier Mendez, who trained Nurmagomedov as well as champions Daniel Cormier and Luke Rockhold, believes that he may have to consider his career with a loss. "If he did lose a second time, I think he would really question if he really needs this or if he still has it."

Former UFC legend Michael Bisping asked on his podcast what Conor would do if he lost—a championship would be a long way off, and would he settle to fighting meaningless fights just for the money?

According to former UFC legend Georges St-Pierre: “I think it is do or die. I truly believe, last time he lost, I believe Conor is very good at adapting. He's a true champion. He has got a very strong mind. However, if he loses this one again, it could be the end for him.”