Munir Ali said that he was really angry, but wouldn’t let his rage get out of control 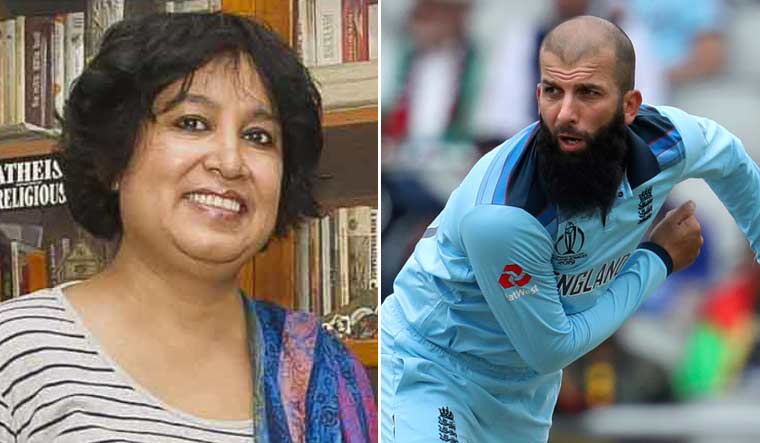 Moeen Ali’s father Munir Ali has reacted to Bangladeshi writer Taslima Nasreen’s comments on the England cricketer, saying that he was “hurt and shocked” at the remarks she made about his son on Twitter.

After Nasreen brushed off the criticism for her tweet that stated that Moeen would have joined ISIS had it not been for cricket, Munir Ali told Indian Express that it was a “vicious stereotype against a Muslim person”, adding that the vile remark was “clearly Islamophobic”.

“In her “clarifying” tweet, where she described her original remark as sarcasm, she also says she stands against fundamentalism. If she looks into a mirror, she will know what she tweeted is what is fundamentalist―a vicious stereotype against a Muslim person, a clearly Islamophobic statement. Someone who doesn’t have self-respect and respect for others can only stoop to this level.

“Truth be told, I am really angry, but I know I would be playing into the hands of people like her if I let my rage get out of control. If I get to meet her someday, I will tell what I really think of her on her face,” he said, speaking to IE.

Nasreen had taken to Twitter to give her two cents apparently following reports that Mooen had requested the IPL franchise Chennai Super Kings to remove the logo of an alcohol brand on his jersey due to his faith. However, CSK management refuted the allegations and said that no such requests were made by the all-rounder.

“If Moeen Ali were not stuck with cricket, he would have gone to Syria to join ISIS,” she had tweeted.

Several people on the social media platform slammed Nasreen for her remarks, with many England cricketers, including Jofra Archer, Sam Billings and Saqib Mahmood, standing up for their teammate.

The writer has since deleted the tweet, but clarified it with another tweet that said it was meant to be sarcastic.

Haters know very well that my Moeen Ali tweet was sarcastic. But they made that an issue to humiliate me because I try to secularize Muslim society & I oppose Islamic fanaticism. One of the greatest tragedies of humankind is pro-women leftists support anti-women Islamists.

“Haters know very well that my Moeen Ali tweet was sarcastic. But they made that an issue to humiliate me because I try to secularize Muslim society & I oppose Islamic fanaticism,” Nasreen tweeted.

To this, Munir Ali said that he would ask her to “pick a dictionary and see the meaning of sarcasm”.

“It’s not what she thinks it is. It’s not spewing vile poisonous stuff against someone you don’t even know and then retracting it by saying it was sarcasm. Of all the people to pick on for her agenda, I can’t believe she has chosen my son. Everyone in the cricketing world knows the person he is,” he added.

Moeen Ali is currently in Mumbai ahead of the 14 edition of the Indian Premier League. CSK picked up Moeen for Rs 7 crore in the mini IPL auction held in February this year.