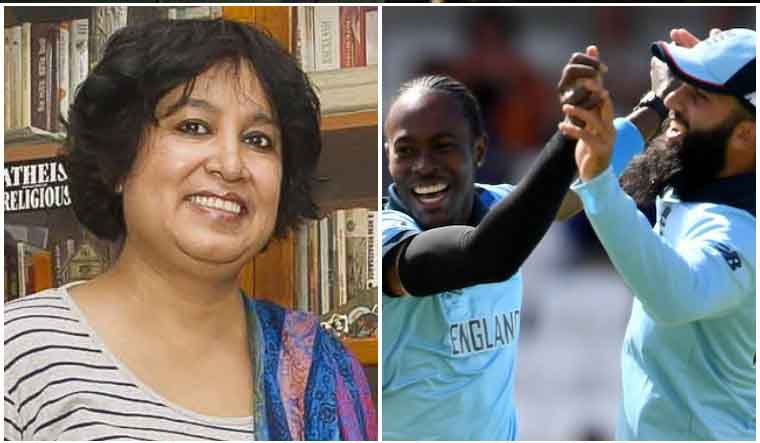 England pacer Jofra Archer hit back at Bangladeshi author Taslima Nasreen for her controversial tweet on English all-rounder Moeen Ali, saying that he does not think she is “okay”.

Known for her controversial posts on social media as much as her books, Nasreen courted controversy when she tweeted that if Ali was not “stuck with cricket, he would have gone to Syria to join ISIS”.

Are you okay ? I don’t think you’re okay https://t.co/rmiFHhDXiO

Though the context of her tweet is yet to be confirmed, it is believed that she was referring to Ali’s alleged request that the logo of an alcohol brand be removed from his Chennai Super Kings jersey – the IPL franchise has rubbished the reports and clarified that Ali never made such a request.

Though Ali is yet to respond to Nasreen’s remark, Archer took to Twitter to make his displeasure known.

With her post drawing a lot of flak, Nasreen tweeted saying that the tweet was “sarcastic”, but Archer was in no mood to buy it.

Sarcastic ? No one is laughing , not even yourself , the least you can do is delete the tweet https://t.co/Dl7lWdvSd4

Archer, who was retained by Rajasthan Royals, will miss the IPL 2021 because of a shoulder injury, while Ali will be part of the Mahendra Singh Dhoni-led CSK this season.