In the 71st minute, Jamshedpur had a goal disallowed 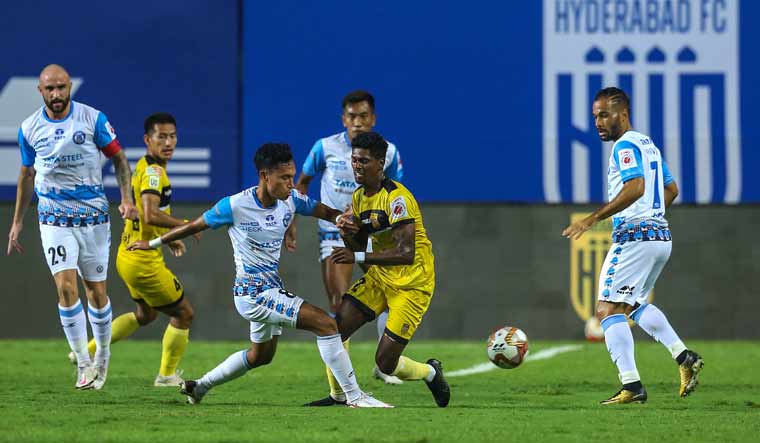 Hyderabad FC and Jamshedpur FC split points after their ISL 2020-21 match ended in an exciting 1-1 draw at the Tilak Maidan Stadium.

Hyderabad FC took the lead in the 50th minute through Aridane Santana, while Stephen Eze equalised for Jamshedpur in the 85th minute. Hyderabad had a golden chance to make it 2-0 in the 56th minute but Asish Rai hesitated in taking the shot, and the ball was dealt with the Jamshedpur defenders.

The game, however, was marred by a few controversial decisions by the referees. In the 71st minute, Jamshedpur had a goal disallowed, probably for a foul on goalkeeper Laxmikant Kattimani. Apart from a couple of questionable off-side calls, Hyderabad had a penalty shout turned down in the dying seconds of the game, when Halicharan Narzary seemed to have been pulled down inside the box while going for a header.

To add to the drama, Hyderabad coach Manuel Marquez was shown the red card for probably entering the pitch in the dying moments of the game.

It took less than five minutes for Hyderabad to launch their first attack. Quick passing allowed them to venture deep into Jamshedpur territory but Akash Mishra's final delivery in to the box failed to find Liston Colaco. Jamshedpur dominated play in the first quarter. Nerijus Valskis and Alexandre De Lima kept the home defence on their toes with constant raids.

For Hyderabad, young Liston showed maturity beyond his age, supporting the defence while not neglecting his attacking duties. He nearly got his name on the scoresheet when his 12th-minute free-kick beat the wall but failed to find the goal. Hyderabad were unlucky to have been denied by the post just before the breather. After getting hold of his marker, Santana found Halicharan Narzary, who dribbled past Laldinliana Renthlei. Having done everything right, Narzary was frustrated as his narrow-angled shot came off the far post.

Hyderabad were ahead five minutes after the restart with Santana scoring off a rebound. Narzary danced his way past Renthlei and pulled the trigger. Goalkeeper Pawan Kumar only succeeded in diverting it into the path of Santana, who rolled the ball into the net.

Jamshedpur's efforts finally paid off in the 85th minute when Eze fired home from inside the box. Chinglensana Singh’s clearance off a Nerijus Valskis cross fell to William Lalnunfela who laid the ball for Eze. The Nigerian made no mistake with his powerful shot.