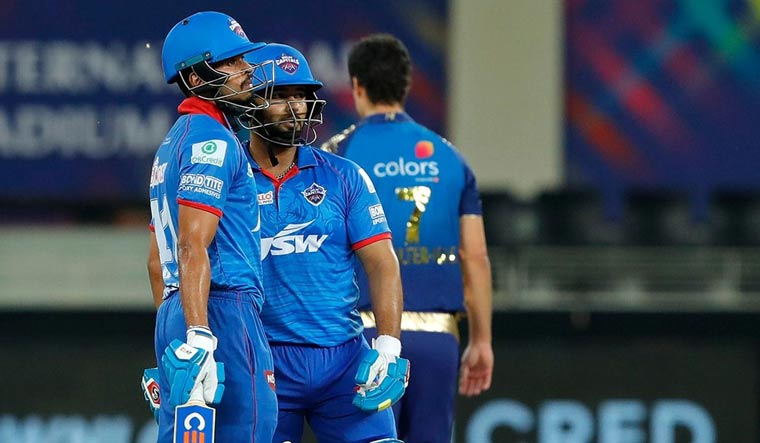 Delhi Capitals skipper Shreyas Iyer and Rishabh Pant managed to guide their team to a respectable total of 156/7 in 20 overs against Mumbai Indians, in the IPL 2020 final in Dubai. The duo put on 96 runs in 69 balls to rescue DC, who had collapsed to 22/3 within the fourth over of the title clash.

DC skipper Iyer's move to bat first after winning the toss backfired, as they lost in-form Marcus Stoinis off the first ball of the match, edging a rising Trent Boult delivery to wicketkeeper Quinton de Kock.

Ajinkya Rahane (2) too fell in the next Boult over, caught by de Kock while trying to play a glance down the leg side. The score soon became 22/3 when off-spinner Jayant Yadav, who was drafted into the playing XI to counter the left-handed batsmen in the DC line-up, castled Shikhar Dhawan (15).

Iyer came out counter-attacking and together with Pant steadied the ship with singles and doubles and the occasional boundaries. However, the dismissal of Pant in the 15th over robbed DC of the momentum and they could only score 38 runs in the last five overs, and lost three wickets too in this period.

Mumbai Indians were brilliant with the ball in death as they were upfront in the Powerplay overs. Boult was the pick of the bowlers, taking 3/30, while Nathan Coulter-Nile chipped in with two scalps.

If Mumbai Indians manage to chase down the total, they will become only the second team in IPL history, after Chennai Super Kings, to defend their title. Delhi Capitals are making their maiden final appearance.