DC bounced back from losses at right time this IPL season: Dhawan 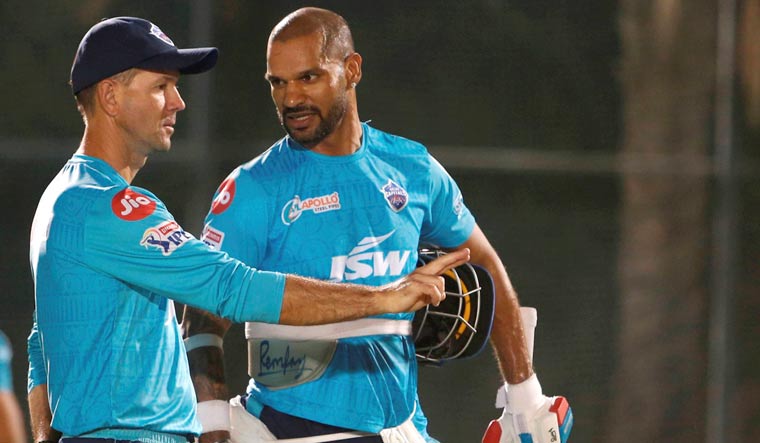 Delhi Capitals batsman Shikhar Dhawan with coach Ricky Ponting during a net session ahead of their IPL play-off match against Mumbai Indians, in Dubai | PTI

Shikhar Dhawan has been the key to Delhi Capitals' plans this Indian Premier League season. Even as his younger opening partner Prithvi Shaw has been struggling with his batting, Dhawan has anchored the DC innings more often than not, be it in chase or batting first. He is the third highest run-getter this season with 525 runs in 14 matches, behind K.L. Rahul and David Warner. But what has been different and better this season is the fact that IPL 2020 has seen him score big after dropping anchor. Both the centuries in his IPL career so far have come this season.

Dhawan is fifth on the all-time IPL run-scorers list. In fact, such has been his consistency with the bat, that from 2016 onward, he has scored close to 500 or more every season.

This IPL, he has been calm and unhurried, and has been DC's batting fulcrum. The presence of seasoned Ajinkya Rahane in the top order has not only made his job a tad easier but has also lent stability to the DC side, which suffered a string of losses.

In an interaction ahead of the crucial play-off match against Mumbai Indians on Thursday, Dhawan said this year DC learnt to bounce back from the losses at the right time. "It has been a great journey so far for DC. The team played well. We saw a few dips as well but these things happen in any journey. It was a good learning for us. We came back at the right time. And we made it look easy in the last game (vs Royals Challengers Bangalore) which we won. We are looking forward to winning the IPL."

The Rohit Sharma-led MI and Shreyas Iyer-led DC were the first and second ranked teams in the points table for a long time. Both appeared evenly balanced, especially in the bowling department, till DC suffered four losses in a row, making them look vulnerable.

Asked what will it take to beat the defending champions, Dhawan said, "It's not the case that MI has an advantage over us, we can beat any team. We just have to play good cricket in all departments and be very clear with our own plans. I believe if we manage to do that, we can certainly win."

On MI skipper Rohit Sharma's return from injury and whether the latter would be slightly disadvantaged, Dhawan said, “Rohit is a very good player, and yes he hasn’t played many matches, so I’m not sure about his touch, and that means that we can definitely take advantage of it. My best wishes to him, but yes as opponents, we can take advantage of that for sure and make plans accordingly.”

On MI bowling unit, which is led by none other than his India teammate Jasprit Bumrah, Dhawan sounded nonchalant on the varied challenges they posed. "At the moment, I’m just relaxing and keeping myself fresh for tomorrow. I’ve seen them plenty of times—have watched the videos and I already know their plans, so I am prepared, and will just go out there tomorrow and perform,” said the 34-year-old.

Dhawan was particularly glad to bat alongside the dependable Rahane as it allowed him to express himself more freely with the bat. "Rahane brings in a lot of stability as you saw in the last game. He played an amazing knock. With that kind of experience, I can play more freely and take the game away from the opponents."

He exuded confidence that his opening partner Prithvi Shaw would emerge from the cobwebs that his batting is entangled in presently. "He is timing the ball nicely. I suggest he stay calm. These moments come in every player's life. As long as he has the belief in his abilities and follows the processes, he will be fine. I’m sure he will get through this and perform well going forward."