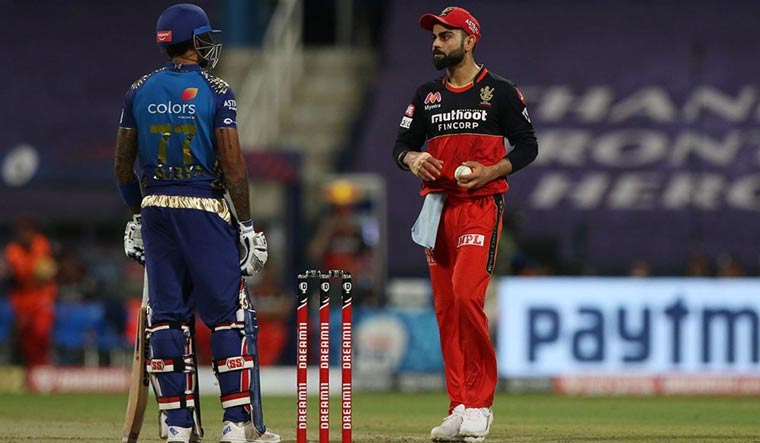 Virat Kohli is no stranger to on-field banters and conflicts with rival team members. He is known to engage with his opponents to get under their skin, especially when the stakes are high.

In a similar incident during the Indian Premier League match against Mumbai Indians, the Royal Challengers Bangalore captain tried one of his aggressive tactics when the spirited Suryakumar Yadav was at the crease.

Mumbai Indians, who were chasing 165, still needed 66 runs with Krunal Pandya and Yadav batting at this point. Yadav, who has come to be popularly known as SKY, hit the ball off Dale Steyn to cover where Kohli stopped it. However, the RCB skipper had more in mind. He walked toward Yadav and stood next to the batsman and glared at him. The Mumbai Indians batsman didn’t hold back and matched Kohli’s stare without breaking eye contact for sometime before walking away graciously. Video clips showed that both players simply stared at each other and did not exchange any words.

Social media soon caught up with this particular incident, with many criticising the Indian captain of trying to intimidate a younger and potentially future Team India cricketer. His act was not appreciated by Twitterati, who called Kohli out for his lack of sportsmanship during the game.

Instead of an aggressive stare to SKY, Kohli would have given some type of assurance for the future team selection.
King Kohli missed that brownie points pic.twitter.com/kjFEeodhg5

Shameful act by virat kohli and no reason for sledge to Surya Kumar Yadav #SuryakumarYadav pic.twitter.com/y4mtnzq2j5

#BCCIpolitics
Captain of National team. Sledging youngsters that too uncapped player.
Got what he deserved... #ViratKohli #IPL2020 #MI #MIvsRCB pic.twitter.com/7axXIZ7AAO

Such a shameful act by such a big player kohli came for sledge SK,,, But Suryakumar Yadav gives perfect reply toh him not by words but by his works 💯 well played S. K❤ @surya_14kumar pic.twitter.com/rJ05Tdr5HV

Yadav was eventually adjudged Player of the Match with his match-winning knock of 79 off 43 balls. Mumbai Indians won the match with five wickets to spare and are currently on top of the table with 16 points.

The 30-year-old was snubbed by selectors for the tour of Australia, but former cricketers and pundits, including India head coach Ravi Shastri, have expressed their desire to see Yadav don the team colours soon.