Of the 5 Indian captains on show this edition, KL Rahul has been the most impressive 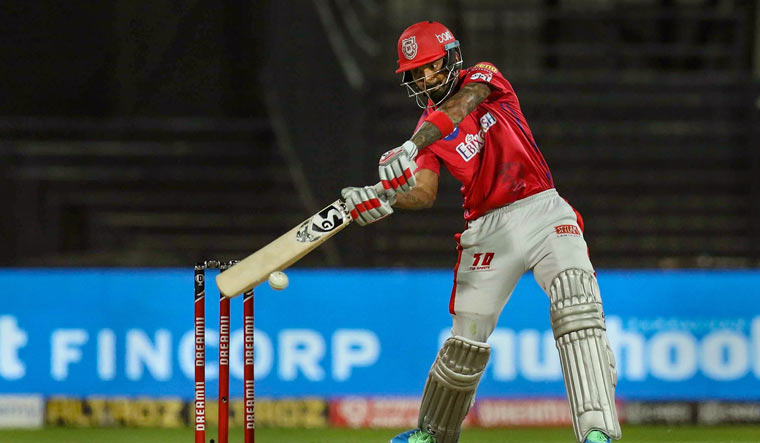 “Which one do you enjoy more, the sound of the ball hitting the middle of your bat or the sound of it thudding into your gloves?” Asking Rahul Dravid this question is a no-brainer, one would imagine, but his response, after becoming the ICC Player of the Year in 2004, would have surprised many. “The sound of the ball thudding into my gloves. Every time that happens, I say thank you!” he said. Those who used to follow Indian cricket back then would know that he was alluding to his wicketkeeping gloves.

Dravid the batsman was often India’s best Test bet, especially in overseas conditions, ever since he made his debut in 1996. But in One Day International cricket, he had become a bit of a liability and that’s when Sourav Ganguly, the then captain, offered a new proposition to him. He had to ‘keep’ his place in the side. For someone who hadn’t touched the keeping gloves since 15, keeping at the international level was a serious challenge. He wasn’t a natural, his feet were all over the place and looked bad and awkward at times, but the quintessential team man that he was, Dravid did the job for his country. In the 73 ODI matches for India as a keeper, Dravid took 71 catches and effected 13 stumpings and with an average of 44.23, he is second only to Mahendra Singh Dhoni in the all-time list of wicketkeeper batsmen who have played more than 5 ODI matches for India.

But, that’s a bonus because the real gain for Team India was the luxury of playing seven batsmen. As it turned out, it wasn’t a luxury but a crucial strategic decision as India went on to win some close matches riding on the back of the number seven, none more cherishable than the Natwest Trophy final in 2002. Years later, when the Kohli-Shastri combination seemed to employ the strategy rather successfully, the man in question is the legend’s namesake and from the same city—interesting coincidence!

The Indian Premier League 2020 has entered that phase where the divide is clear and the categories are formed. When the ones at the top are looking to consolidate and gearing up to get to the finish line, a few ones in between are keeping the mathematicians and the Almighty busy. The scramble is inevitable. While it’s about form, fitness, confidence and skills, from hereon it’s also going to be a lot about the men in charge. Shreyas Iyer, Rohit Sharma and Virat Kohli—all seem to be comfortably placed at the moment but what interests me is the contrasting stories of two captains who found themselves in the same deep waters but chose different directions to swim. Dhoni has been forced to take a seat where he has never before watched the tournament from. Short of answers, he looked uncharacteristically shaken and the ‘Youngsters lacking spark’ was a rather unusual comment from the ‘Captain Cool’. On the other hand there was Kannur Lokesh Rahul who, despite being criticised heavily earlier in the tournament, has been gracious in accepting them and also inspiring his team to a better standing in the points table.

Many feel that of the five Indian captains on show this edition, Rahul has been the most impressive. “Well begun is half done” goes the adage and things are a lot easier for the captain when his team gets off to a good start. The Kings lost their opening match to the Delhi Capitals in Super Over and Rahul was at the centre of it with what appeared to be a tactical blunder by not sending the in-form Mayank Agarwal to bat in the Super Over. Things would only go from bad to worse for the Kings in the next half a dozen matches as they managed to win only one of their first seven matches.

The corporate nature of the league and the constant pressure to perform can take a heavy toll on even the very best. The IPL has seen many a player relinquishing captaincy mid-way through the season unable to cope with the pressure but the way in which Rahul has handled the pressure is praiseworthy. There were scathing criticisms of some of his decisions as captain and also his diminishing strike rate but the maturity, calmness and resilience he has shown in dealing with all that is remarkable.

As a keeper, Rahul might be more natural and experienced than his illustrious predecessor from Bengaluru but to open the innings, keep wickets and take tough calls in tight situations in a format where the game moves very fast, is some serious pressure and one must say that the man has done a fantastic job. And by contributing significantly with the bat, Rahul has been able to lead by example. Most importantly, he seems to enjoy the responsibilities whereas someone else would have felt burdened by them. With another Karnataka legend Anil Kumble lending him support as the coach, the chemistry between the two seems to be working fine. By defending an improbable 126 against the Sunrisers Hyderabad the other night, Rahul & Co have generated more interest in the proceedings before the playoff starts. The Kings have got quite a bit of work still to do if they were to qualify but their comeback has had a positive influence on the tournament.

The IPL is often about promises as much as it is about current performances. Right from its inception, that has been the beauty of the tournament. It has always thrown some light on the future. Rahul, in his own rights, is already an established player in the Indian set-up but this edition of the carnival has only underlined that. It’s almost as though Rahul is making a quiet yet strong statement, “The future is here”. And yes, the orange colour of his cap is just another feather!