With the win, Djokovic also surpassed Nadal for the most ATP Masters 1000 titles 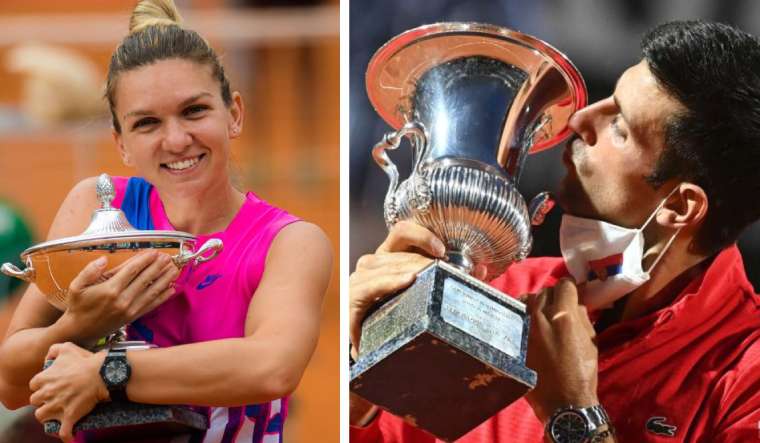 Simona Halep and Novak Djokovic with their Italian Open trophies | via Facebook; AP

Halep was leading 6-0, 2-1 when Pliskova, who had her thigh taped during the match, stopped play after 31 minutes. She had her back looked at by a trainer after the first set before retiring midway in the second.

“Disappointed for me not to finish today. But Simo, obviously too strong. I always have to be 100 per cent to play a good match against you. Congratulations for the whole week. I think you deserve the title,” Pliskova said after picking up her runner-up trophy.

Halep wished Pliskova a speedy recovery in time for the French Open starting next and added, “Probably we will meet again there in the final.”

The Romanian tennis player is now the frontrunner for the title at Roland Garros, having won the Dubai title before the coronavirus shutdown in March and then the Prague Open after the WTA resumed play.

Djokovic took his first set in a little over an hour after falling behind two breaks as Schwartzman raced out to a 3-0 advantage. The Argentine committed two unforced errors in the eighth game of the second set that saw Djokovic break. The Serb then set up three match points to seal his victory.

“It was a great week, a very challenging week. I found my best tennis when I needed it most,” said Djokovic, who was playing his first event since being defaulted at the US Open earlier this month.