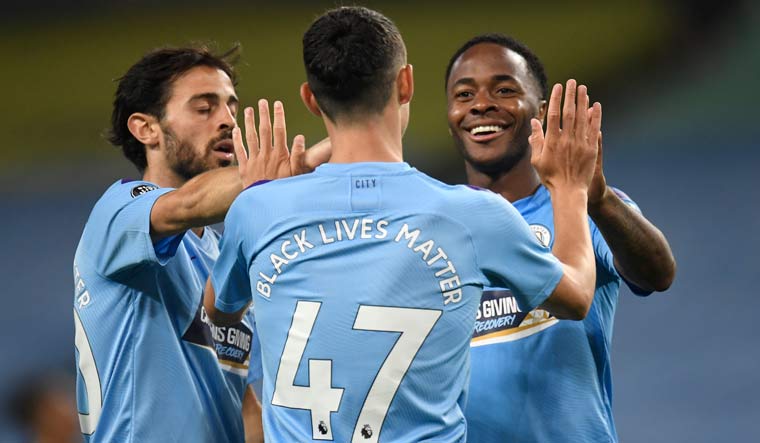 Real Madrid's defensive mistakes by Raphael Varane were seized on by Raheem Sterling and Gabriel Jesus to lead City into a quarterfinal against Lyon. They clinched another 2-1 victory against Madrid on Friday after winning by the same score in the first leg in the Spanish capital in February before the competition was paused due to the pandemic.

Gabriel Jesus set up the opener scored by Sterling in the ninth minute at an empty Etihad Stadium. With Madrid captain Sergio Ramos banned after being sent off in the Madrid leg, Raphael Varane was without his usual central defensive partner. The Frenchman was caught out in possession by Gabriel Jesus, who squared for Sterling to tap past goalkeeper Thibaut Courtois for his 100th City goal.

City went close to a second before the break after a poor clearance from Courtois went straight to Kevin De Bruyne, but Phil Foden playing as a false nine with Sergio Aguero injured struck wide.

Another blunder by Varane in the 68th minute was again capitalized on by Gabriel Jesus. Varane failed to cut out a long ball forward and then made an ineffective attempt to head back to Courtois. Gabriel Jesus closed in quickly and dinked the ball over Courtois.

Lyon's quarterfinal against City will be played in the stadium of Lisbon club Sporting. The seven games in the Portuguese capital, including the final at Benfica on Aug. 23, will be played without fans due to pandemic restrictions.

The lack of spectators meant the match in Manchester was not preceded by the usual booing of the Champions League anthem by supporters angered by UEFA pursuing Financial Fair Play cases against the Abu Dhabi-owned club.

Since the first leg, though, City overturned a two-season ban from European competitions after being cleared in an appeal case over the source of funding from Abu Dhabi, including from jersey and stadium backer Etihad, to comply with break-even rules.

But City's obstruction in the case was strongly condemned by the Court of Arbitration for Sport which led to the club being fined 10 million euros ($12 million), which was two-thirds less than the original UEFA punishment. Now City's season can still end with the club UEFA wanted to ban picking up its biggest club prize.